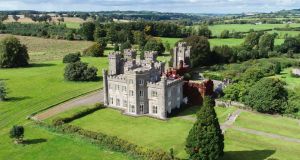 Knockdrin Castle and its core demesne of over 1,000 acres had been owned by the von Prondyzinski family since 1961

Former DCU president Professor Ferdinand von Prondzynski is understood to have secured just under € 10 million from the sale of his family’s palatial Westmeath home and estate.

While the price achieved by Knockdrin Castle and its core demesne of over 1,000 acres represents a substantial discount on the €13.5 million the well-known German academic had been seeking when he first offered it to the market in 2017, it is only slightly less than € 10 million guide price David Ashmore of Sotheby’s International Realty attached to the property when re-launching it for sale last February.

Having failed to find a buyer on its original outing, the Knockdrin estate is understood to have attracted significant interest on this occasion from both Ireland and from overseas. The castle, has been sold along with some of its key contents and 1,000 acres to the Meath-based entrepreneurial couple, Noel and Valerie Moran.

The Morans, who sold their online payments business, Prepaid Financial Services (PFS), for € 327 million in 2019, are said to be planning an extensive restoration of both the castle and its wider estate.

Built originally by Sir Richard Levinge on an ancient site following the commissioning of works in 1810, Knockdrin is acknowledged as one of Ireland’s foremost estates. The Gothic Revival castle itself extends to some 19,375sq ft and has 12 bedrooms, a large reception hall, drawing room, dining room, ballroom and library, along with an elaborate first floor gallery space. The grounds of the main property feature numerous points of interest including the ruins of a tower castle, thought to date from the 14th century, and a Turner glasshouse.

The estate lands include belts of productive agricultural lands along with commercial woodland and a large lake, Lough Drin, where the footprint of a lakeside tea house is still visible.

The Knockdrin estate had been under the ownership of the von Prondzynski family since they left their home in Germany to settle there in 1961.

While the restoration of the castle and its surrounds will likely require a significant investment, the Morans are well-placed financially to carry the cost, having received a payout of up to €266 million following last year’s sale of PFS.

Suitably described as a “local boy done good” in a profile carried in The Irish Times following the deal, Noel Moran is a 50-year-old native of Navan in Co Meath. A career banker from the age of 18 with various stints spent working in Permanent TSB and AIB in Ireland, and MBNA, the Co-Operative Bank, RBS and Altair Financial Services in the UK, Mr Moran set up PFS in London in 2007 with the aim of selling prepaid payments cards to smaller corporate clients.

His first hire, and business partner, was Valerie Willis. Having first met Noel a year previously, she left her paid job to work at her partner’s start-up, which couldn’t pay a salary at first. From Zimbabwe, she had little financial services experience, having studied systems analysis in Harare before working in property and later with a tobacco company. She had moved to London around 2003, prompted by a recession in Zimbabwe, working in insurance before moving into the payments business with Mr Moran.

After losing £36,000 (€ 42,000) in the first year of its operation, Mr Moran set about trying to raise money to bolster the company’s finances. Having failed to secure the required funding from investors, the couple were forced to rely on their personal savings until, five months later, they landed a large client. Today, PFS operates in 25 countries and boasts revenues of around £86 million and earnings in the region of £13.5 million.