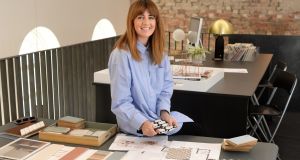 With less than two weeks until the UK leaves the EU and Brexit becomes a reality Clones-based interior designer Tonya Douglas has come up with a supply plan that is all about shopping local for her Border-based business.

“The plan was to establish good local suppliers within Ireland that are reliable and won’t let you down, customs or no customs,” she says. “If there’s a problem you can send it back.”

Covid-19 heightened our awareness of the economic impact of shopping from overseas stores. Currently 70 per cent of the online spend in Ireland goes to overseas based retailers, according to Retail Excellence Ireland. And while searches for shopping local and buying Irish gifts are up more than 500 per cent and 200 per cent respectively, according to Google, this data doesn’t cover bigger ticket buys like building materials, furnishings and furniture.

Tonya grew up in Clones, Co Monaghan in the shadow of the Northern Ireland Border, where the town of Magheraveely in Co Fermanagh in the North is about equidistant.

This is Tonya’s third year working as an interior designer. Before that she had spent about 15 years in the UK and was a young mother working with Quinn Insurance when she decided she wanted to switch career. Before making the leap she first shadowed a friend, Sean Costello of Oppidan Interiors in Manchester, to make sure it was the right decision for her. She quickly realised it was and her broker-cum-manager background has given her a good grounding in time management and working multiple jobs at ones.

Having trained at the JAADA Academy in London she picked up the early jobs for her company, The Little Design House, refurbishing homes for Irish friends returning to live in Ireland.

Now the concentration is on newer build projects such as this Co Monaghan home, pictured. It’s home to Belgian-born, Inge Nysten and Declan Ronaghan. She first met Inge who works for a waste management company in Netherlands and runs two Leonidas chocolate shops, in Naas and Maynooth, after their planning permission for a design by a Belgian architect had been rejected by the local county council . Inge wasn’t so keen on the revised design. “My objective was to make her fall in love with a design she didn’t like, ” she says.

“It was about simply guiding the couple through the process, step by step. In a new build people can get overwhelmed. You have to have time to give thought to certain elements and to process those thoughts. For example when to start looking at bathroom fixtures.”

Tonya recommends allocating budget to the various jobs as early as possible and then setting up a spreadsheet of costs. It makes the spending real and shows where it’s going. For example if you decide you want a hob for the island that costs €2,000 then money has to come from somewhere within the budget.

Disruption caused by Covid-19 has added a layer of complexity to the decision-making process. “The more forward planning you can do the better the outcome. Ideally you’d have all these considerations in place before the builder lays the foundation,” she says, explaining that it leads to a more cost-effective build.

But Covid-19 is hopefully only a temporary blip, whereas Brexit has more profound ramifications in terms of being able to continue to freely source goods currently available and at their current prices.

With County Monaghan once a heartland of furniture-making Tonya decided to tap into existing local-based talent – sofa makers, upholsterers and cabinet makers – to fit out the property. In the design and furnishing of Inge and Declan’s home Tonya has championed Irish wherever she could.

Her selection includes some retailers with a presence here, independent interiors shops, kitchen joiners and sofa makers. The result is a confident look that’s a million miles from the grim stony grey soil portrait conveyed by poet and Monaghan native Patrick Kavanagh.

She hired PJ McDermott, situated midway between Monaghan town and Ballybay, to build the kitchen and supply quartz countertops.

The pendant above the island is one of several custom-made by Mullan Lighting, a firm that set up in a former shoe factory in the village of Mullan and in the darkest days of the last recession started to show at Paris-based trade Maison et Objet, and now trades internationally. It is one of the county’s great design success stories and its custom lighting graces swish establishments from Dublin’s Café En Seine to the Heritage Hotel in Co Laois.

The dining table was sourced from Upstairs Downstairs and the dining chairs are from Mantra Living, both independent decor shops in Monaghan town.

In the living room sofas by John Lynch Upholstery are set around a coffee table and rug also from Upstairs Downstairs. The built in glass-fronted bookcases offer storage without taking up the same volume as traditional freestanding styles. Made to measure these studded-out niches are only 40cm deep.

The steel balustraded stairs leading to the bedrooms on the first floor was made by McQuaid Joinery in Killyneill and the girls room is painted Sulking Room Pink, a Farrow & Ball colour.

Tonya sourced all the sanitaryware from Grahams of Monaghan, an almost one-stop shop that supplies bathrooms, building materials, paint, electrics and everything for the garden. Meanwhile the calacatta-look marble tiles were furnished by Irwin Tiles and Hardwood Floors in nearby Castleblaney. These include the wood-effect feature wall in the shower, laid out in a chevron pattern.

Curtains for the project were made to measure by McAllister Interiors, based over the border at Crossmaglen. The wingback headboard in the main bedroom is one of the few non-local purchases. It came from UK-based Made.com. Tonya believes a renewed focus on all things Irish will help to minimise the brunt of Brexit fallout while delivering a win win for her and local suppliers. “By buying local you’re also supporting Irish business.”