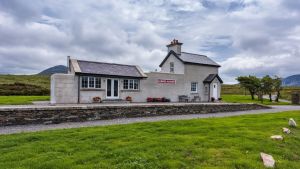 Situated between the Gweedore and Falcarragh stops on the old Letterkenny to Burtonport railway line in north-west Donegal, Cashelnagor Railway Station looks like a film set: a unique building, complete with waiting room, but minus its platform and surrounded by nothing but gold and amber bogland.

Small wonder that the locations manager on the 1992 film The Railway Station Man, starring Donald Sutherland and Julie Christie, fell in love with the spot. It has also been immortalised by modern Irish language poet Cathal Ó Searcaigh volumes, whose 2002 work, Caiseal na gCorr, with photographs by Jan Voster, is named after the townland.

Just five miles inland from Gortahork, the nearest place to get a pint of milk, and along the Donegal Cycle Route and Slí an Earagail, the county’s tallest peak and one of the Seven Sister mountains that punctuate the surroundings, the three-bedroom residence is a place you can invite friends to indulge in hiking trails only traversed by sheep.

The property, which is in the Gaeltacht, belonged to the family of Josephine Kelly when she and her husband Gavin bought it in 2017. Her great aunt married a man who became its stationmaster and she recalls her grandmother telling her about visiting her sister and taking the “shortcut” home along the railway line, her brother-in-law ferrying her along the tracks on a trolly. If they were lucky the dark skies above might have delivered an aurora borealis show or a shooting star at least, and Josephine and Gavin still see the pulse of the lighthouse on Tory island from the upstairs bedroom, just as her great aunt recounted.

The train ran when times were hard and was the first stage in many an emigration. Special trains ferried locals to the hiring fair in Letterkenny where big farmers from the Lagan valley took on seasonal workers to tend their rich lands, often the only monies coming into a homestead. From its platform men, women and children departed dear old Donegal for Scotland, tatty hoking, as seasonal migrant workers. During the Great War when coal was scarce trains were loaded with turf, harvested by locals, and shipped out to use in lieu of coal.

The couple refurbished the property, gently breathing life back into it and, before they opened it as a short-let on Airbnb, invited all the neighbours in to have a look around. The property has generated an average an income of about €15,000 during the summer months but they feel there is scope to push the shoulder seasons too, something they had not actively pursued.

Josephine’s family remained in situ until the 1960s, long after the line closed in 1947.

Derelict when they bought it, the property, which now extends to about 96sq m/ 1033sq ft, has flagstone floors and timber windows, a mix of sash and casement, and is divided into two, a one-bedroom, self-contained flat set in the waiting room and the main building, with one of its two bedrooms at hall level.

“We used old photographs to try and keep it as it had been,” she explains. The interior now includes a sleeper from the railway in one of the bedrooms, an old Stanley stove found in a salvage yard in Co Meath and a mid-century press, once common in Donegal homes, at an auction in Letterkenny. There are Belfast-style sinks in each of its two kitchens.

Set on almost three acres of land there is scope to extend or build a business on the site for the foundation of the platform remains intact, as is the one belonging to the goods sheds. With no light pollution the stargazing is pretty epic, Josephine says. By day you might spot the odd buzzard or Golden Eagle overhead, the latter reintroduced to nearby Glenveagh National Park about 20 years ago.

The E2 Ber-rated property is asking €299,000 through agents SherryFitzGerald Rainey