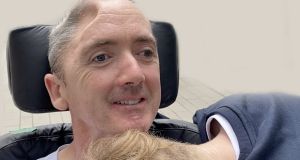 Des Vallely is reunited with his children Daniel and Ella Rose six months after his tragic accident.

It has been a tough year, and many want to see an end to what has certainly earned the moniker annus horribilis.

For the family of Des Vallely, who established Irish Village Markets, it has been particularly difficult. On January 8th, shortly after dropping his children Daniel (12) and Ella Rose (9) to school, Vallely was cycling to work along the quays in Dublin, looking forward to heading on holidays the following day.

Instead he suffered a catastrophic brain injury after falling from his electric bike. The children did not see their father again for six months and when they did, he was unable to speak and wheelchair-bound after life-saving surgery at Beaumont Hospital.

The coronavirus pandemic added further complication to this tragedy, with Vallely’s wife Tara Dalton unable to visit, and left to feel that her husband “was locked away like a prisoner”. After a move to the National Rehabilitation Hospital in Dún Laoghaire, his fighting spirit saw him begin to communicate with the blink of an eye and whispers. Seeing the spark in his eyes when his children were eventually allowed to visit, the family determined to bring him home.

“I’ve known Des for 20 years, he is inspiring and full of possibility. Despite the difficult year we have all had, I knew it was an absolute must for me to get involved,” says auctioneer Niall Mullen, who is behind a charity auction to raise funds to allow the Vallely family to bring Des home.

The goal of the auction is to raise funds for home care for two years, and items for sale include paintings by John Morris and Valda Sterne. Signed memorabilia and collectables from cyclists Bradley Wiggins, as well as Alberto Contador – one of only seven riders to have won all three Grand Tours of cycling – feature in the auction, along with Irish sports memorabilia from footballer Bernard Brogan.

There are also lovely breaks to top hotels including The Merrion, Castle Leslie, Wineport Lodge and Mount Juliet. The auction and fundraising event – where you can donate just €1 – is titled Walk Des Home. walkdeshome.ie