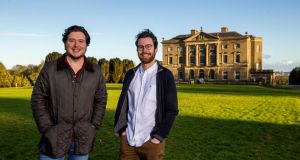 A couple who found themselves living alone in a stately manor during the pandemic used the time to revitalise its historic interior.

Neil Watt (36) moved into the top floor of the Castle Ward mansion in Co Down with his partner Kris Reid (29) in March after being appointed collections and house manager of the National Trust property.

Mr Watt, who has a PhD in Irish country houses, was preparing to welcome thousands to the popular 18th-century visitor attraction on the banks of Strangford Lough but those plans were quickly upended by coronavirus and the resultant year of lockdowns.

Instead, Mr Watt and Mr Reid, who is himself studying for a PhD in heritage, spent most of 2020 with the huge home to themselves.

The experienced conservationists did not put the time to waste, using the unexpected closure to breathe new life into some of the mansion’s spectacular features.

As the months wore on, they tackled project after project – restoring parts of Castle Ward’s shabby chic interior back to former glories.

First there was the installation of a new dehumidifying system to address a centuries-old damp problem.

Then they set about cleaning and cataloguing the house’s collection of 2,000 books, most dating from the 18th century.

Castle Ward also boasts one of the finest sets of cooking pots and pans on the island of Ireland, but over the centuries it had become blackened and tarnished.

The couple took on the job of polishing the 100 pieces one by one. They did the same with many other fixtures and fittings, including all the brass door handles.

The good weather in the early summer enabled the men to clean the antique window blinds and beat down the luxury carpets and rugs.

There was also the delicate job of cleaning the crystal Victorian chandeliers.

Mr Watt, who is originally from Tyrone, said in any other year the jobs would not have been doable.

“You only have so many hours in the day and if the house is open from 11am until 5pm you can’t do all this work in front of the public, because it would detract from their experience,” he said.

The tasks were not all practical. Mr Watt also took time to reimagine the story of the house’s contrasting architectural styles – one front Classical, the other half Gothic.

The long-standing story was this “Frankenstein house” of two halves was the result of a bitter row between the then Lord and Lady Bangor, with neither willing to give ground on their design preference for their new home.

“There’s no way this was born out of an argument, nothing so trivial could have created this house,” he said.

So the house manager created a narrative to accompany tours that instead explained the contrast as a deliberate fusion of the Classical style so fashionable in the 18th century with a Gothic element to acknowledge the family’s storied history.

“One good thing to come out of lockdown is that we’ve reimagined ourselves, we are not a Frankenstein’s monster, we are a sublime piece of architecture,” he said.

When restrictions allowed, Mr Watt and Mr Reid, who is from Co Down, were helped by National Trust colleagues and a small band of volunteers from the local area.

Castle Ward’s house steward, who was shielding in another property on the estate, also provided lots of organisational support remotely.

“The people of Strangford are wonderful, they really are,” said Mr Watt.

“They’ve been so welcoming to myself and my partner. We’re a gay couple who moved into a big old country house and really, without exception, even during the trials of Covid, they couldn’t have been more welcoming, more wonderful.

“There’s just such a lovely spirit here. There really is. I mean if you could bottle it you would sell it.”

Castle Ward was able to open briefly to the public in the late summer, with tight restrictions in place, but it was not long before the doors had to close again.

Mr Watt hopes all the hard work will pay off when the house can finally welcome back the public properly.

Amid all the projects, he said there has been time to stop and take in their remarkable lockdown surrounds.

“If you get bored in the evening, to come down and see 18th-century landscapes of Strangford Lough, to stand under beautiful Victorian chandeliers and walk through big Marmorino marble columns and that sort of thing is really amazing,” he said.

“And something that we both love living here is the view, because from our sitting room window we can see the town of Portaferry across the lough.

“And that’s actually one reason why we haven’t felt lonely, because even when we were in full lockdown, we could always see the twinkling lights of Portaferry across the lough.” – PA