Making every centimetre count: ‘Even changing the way a door swings can make a big difference’ 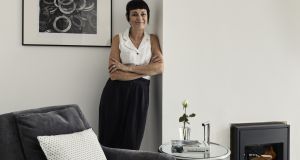 “Every centimetre counts in an apartment,” says architect Eva Byrne. “But just a few small tweaks can make great improvements.”

When she was commissioned to make this apartment in Dartry, Dublin 6, suitable for renting, Byrne first thought about storage and then thought: “Hang on a minute, people are working from home.” In a two-bed rental property this could mean four young adults needing desk space.

So both bedrooms – one on the lower floor and one upstairs – lost their doors into the bathrooms, leaving the latter accessible only from landings. “I don’t like bathrooms with two doors,” says Byrne. In this case they were “pretending to be en suites too and dictating where the bed was”. In one bedroom the door to the bathroom wiped out that wall space, which had two doors on it. This meant the bed could only be placed where “you tripped over it as you came into the room. Whoever designed the apartment didn’t seem to think about room layout.”

Having cleared the spaces and put the beds (refreshed in a coat of white from their dated brown) into better positions, Byrne had desks – with shelves above – and wardrobes built in by John O’Shea of Customised Creations.

Other spaces to work in – with whichever hand you like – include two spots in the living room and in a former third bedroom, which has a sloping ceiling. Byrne convinced the client that this room would be better used as an office, yoga room and laundry.

“In apartments it is always great to get washing machines out of the dining area,” says Byrne. The white-goods are now hidden behind built-in cupboards that hide “horrible pipes” and provide a surface for printers and papers.

Used to reconfiguring people’s homes, Byrne was busy during recent lockdowns as “everybody realised their homes don’t work”.

“You hear a lot of talk about working from houses but not a lot about working from apartments,” says Byrne who tackled this property from every aspect including the kitchen and living room, to the left of the front door. This had the standard wall between the two, with a long dining table against it and a couch backed up against the wall beside the fireplace, forcing the furniture “to line up like a train carriage”, says Byrne.

She moved the double-sided kitchen over to one wall of the galley space, and put a big fridge/freezer on the opposite wall – just 60cm from a unit on the other side. “Designers might not let you do that but it works,” she says, noting that “everybody wants a decent kitchen”. A breakfast bar on the opposite wall is thinner than standard too in order to easily fit the space.

She replaced the wall between the kitchen and living room with a bookcase and created further flow with a full-height door. The couch moved to opposite the fireplace – “Which is where it wants to be” – and a round dining table went into the west-facing bay window.

Made from glass and chrome, this table “disappears” during the day and throws a bright halo of light onto the ceiling at night. Byrne left an alcove clear for a desk but didn’t build it in, so that the space could be kept flexible. “Working in the bay window would be quite nice too.”

“In apartments it is good to repeat things: it is calming in a limited space.” Byrne has used pale blue-grey joinery throughout, painted the beds white, repeated the desk, shelf and wardrobe design, and, throughout, has hung a series of five prints she bought for €10 in a sale at the Huge Lane Gallery.

“Art is very important, to animate a space,” says Byrne. Another recurring theme is grey, from the cushion-backed soft vinyl floor in the living room, to the Metro tiles in a bathroom and the spiral stairs, which were softened from stark black, to grey and white.

“People have very little flexibility in an apartment – there is nowhere to hide – and yet many of them are quite careless in how they are thrown together.”

Resolving space aches can sometimes just involve doing something small and significant in each room, she says: “Even changing the way a door swings can make a big difference. Reconfiguring an apartment properly just takes thought – it is not going to cost you any more,” says Byrne.

Built-in furniture: Customised Creations, facebook.com/customisedcreationsbyJohnoshea/A desk and shelving cost from €350, a built-in wardrobe is around €2,500-€3,000, a small kitchen starts at €6,000 and a standard one is from €10,000.