Fantastical mansion sale to include triceratops head and a flying giraffe 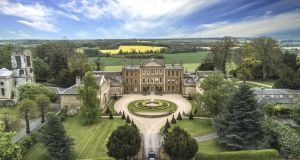 Aynhoe Park has been dubbed the coolest house in Britain

It has been dubbed the coolest house in Britain. Where else would Britpop bad boy Noel Gallagher have held his 50th birthday bash in 2017?

The Netflix Narcos themed gig, where the Oasis frontman and Bono both grinned for a selfie – and the party that Madonna apparently crashed – was held at Aynhoe Park; a renowned venue for fantastical parties and weddings.

The Grade I-listed Georgian mansion is not a hotel; it is however, a spectacular private house embodying the best of British eccentricity.

The contents of the Palladian country house will be offered for sale by Dreweatts in a three-day sale beginning Wednesday, January 20th and ending on Friday, January 22nd, 2021.

The 17th century house sits on 101 hectares (250 acres) of Capability Brown gardens in the Oxfordshire countryside. It was restored by former music industry mogul and collector James Perkins along with his partner in life and business, Sophie Perkins. They transformed the property into an excitingly modern treasure trove of art and design that manages to remain sympathetic to the building’s heritage.

The interiors contain a mixture of periods, styles and textures, which are simply breathtaking, and the aesthetic is one of a museum crossed with a fantasy setting straight out of the Chronicles of Narnia.

Its rooms and spaces are audaciously decorated with finds from the couple’s travels with whimsical taxidermy, and one of the world’s largest plaster collections.

Born out of a passion for the architectural and a desire for capturing historic buildings, Perkins amassed plasterwork from iconic museums comprising almost 4,500 pieces.

The sale will feature some of the key pieces from this impressive assemblage, including a huge plaster cast of a section from the Erechtheion in Athens (on the north side of the Acropolis). From the 20th century after the antique, it shows two caryatids supporting the entablature, raised on an egg-and-dart moulded plinth (£10,000-£15,000).

An unusual continental carved limed-oak and marble-topped pier table in mid-18th century style, features a marble top above a naturalistic tree-work base, with a standing ostrich. It is estimated to fetch £1,500-£2,500.

As you would expect, even the beds here have a yarn. One highly decorative offering is a Victorian gothic revival four-poster bed dating from around 1860 – formerly from the House of Hanover – which features arches and crenulations (emulating the pattern of a wall around the top of a castle). It is supported by the four posts surrounding the base (£4,000-£6,000).

A fabulous 1959 Le Mans tribute half-scale model of the winning Aston Martin DBR1 is included in the sale. The static model of the car was created to commemorate the victory by Roy Salvadori and Carroll Shelby at the 24-hour race, and currently hangs in the library at Aynhoe (£10,500- £15,000).

As for taxidermy – and boy if these animals could talk they would probably have to sign non-disclosure agreements – the only thing missing is a unicorn. But you will find them in an early 20th century painting surrounded by other animals in a wooded landscape, in a work that features the Aynhoe Park coat of arms (£4,000-£6,000).

Another features in The Aynhoe Unicorn, in which Perkins used a preserved model of a horse presented as a unicorn with a fantasy tacked horn onto his head (£5,000-£8,000). And should you be in the market for a life-sized polar bear, the sale lists an early 21st century Ursus maritimus on a full mount complete with his import licence from Canada in 2006 (£6,000-£8,0000).

One of the oldest pieces in the collection is a triceratops head. With its three-horns, the triceratops is one of the most identifiable species of dinosaur that lived at the very end of the Cretaceous Period. Before the mass extinction, triggered by the asteroid that caused the Chicxulub crater 65 million years ago, these 30-foot long herbivores, weighing 12 tonnes, roamed in an area that is now to the East of the Rocky Mountains in North America (£180,000-£250,000).

Art includes work by London-based artist Stik, who is renowned for his ‘stick like’ figures made up of just six lines and two dots. His giclee signed print with studio stamp is listed at £40,000- £60,000. Also in there is a pigment print with Swarovski crystals of Kate Moss by Chris Levine (£30,000-£35,000).

Also featured are conceptual works by Perkins himself, who the auction house describes as “a highly rated designer and artist in his own right”. These works include The Aynhoe Moon painting – said to be influenced by the clear nights on the estate (£1,000-£1,500) – and the famous Flying Giraffe, a real preserved animal hanging from crystal balloons in the orangery.

The vast array of lighting includes a Murano glass 16-light San Giorgio chandelier – its green hues evoke a fantasy rainforest (£7,000-£10,000) – and a pair of superb gothic revival 26-light candelabra, soaring to over 3m in height which have been adapted for electricity.

Perkins, who is in the process of another ambitious restoration project, namely Parnham Park in Dorset, commenting on the sale said: “It has been my passion, as well as a family home. We have enjoyed carrying on the tradition of Aynhoe Park by sharing and hosting our home with the most respected people from the world of business, film, fashion, art and music.”

Indeed, and the taxidermy was there to see it all too. See dreweatts.com.