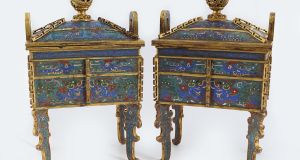 Chinese artefacts have become a regular feature of Irish auctions , attracting a good deal of interest and money from Chinese collectors.

Two upcoming auctions, one in Co Laois and another in Co Kilkenny, feature Chinese items, with some lots dating back to the Wan Li Ming dynasty of the 1600s.

Chinese porcelain was first transported to Europe during the reign of Emperor Wan Li, the longest reigning monarch of the Ming Dynasty (1572-1620). The Ming period, which lasted from 1368 to 1644, is considered by some historians to have been one of the most prosperous in human history.

Wan Li ascended to the throne at the age of nine, and was married to his empress, with a host of concubines, by the age of 14. Frustrated with the constraints of his court, he went on strike against it, and his lack of attendance meant visitors and officials bowed at an empty throne.

His indolence, along with with an economic crisis and a widespread epidemic, was blamed for the downfall of the Ming dynasty.

Also featured among the 150 lots are 11 censers, some of which date from the Qing period, China’s last imperial dynasty.

Censers were crafted from bronze, copper and porcelain and were designed to burn incense during ceremonial offerings and religious rites. They were also made for distinct uses that signified social status, including perfuming bedclothes, or small censers to warm hands in the depth of freezing winters.

It bears a great resemblance to the Foo Dog censer that sold last year though Sheppard’s for €95,000.

“Yes it is remarkable, and anything can happen” says Michael Sheppard of the appearance of two similar censers on the Irish market in the space of nine months. sheppards.ie

In Castlecomer, Co Kilkenny, a Fonsie Mealy sale on Wednesday February 19th at the Avalon House Hotel also features some Chinese artefacts, including lot 148, which is a champlevé incense burner with a Foo Dog lid (€160–€220).

The auction, which also features a good selection of tables and chairs, is a clearance sale from Fonsie Mealys’ storerooms. All items are listed without reserves, so there are plenty of bargains to be had, if items sell within their estimates.

“The pieces have been in our storage for the guts of two years, and as they are from estate sales, we have been directed to close the accounts, and sell everything off,” says George Fonsie Mealy of the auction which will appeal to new homeowners and interior designers alike.

Lot 2 is a set of six Victorian carved back and open parlour chairs on front cabriole legs, which, at an estimate of €70–€80, appears to be great value, as is lot 48, a harlequin set of 10 Victorian Irish dining chairs.

Harlequin sets of chairs, though similar in style, have slight variations, such as differences in carving details. The 10 chairs, which have faux leather covers, are listed at €150–€200. If reupholstered, one would know they are not exact matches.

Something you don’t see that often is lot 57, an arts and crafts conversation chair (€250-€350). Also known as a courting chair or vis-à-vis, it kept genteel Victorian and Edwardian men and women discreetly apart – heaven forbid their knees would touch while talking. Conversation chairs have been emulated over the years by many, from Salvador Dali to modern designers such as Christopher Guy.

Lot 343, a 5ft hunting table, is listed for €250–€350, along with a good quality George III twin pedestal dining table, which can be extended to almost three metres (lot 112, €400-€500). The sale also has a number of side boards and occasional tables with low estimates.

Like all country sales, some curiosities are thrown in for good measure. Lot 425 is the oddest, if not the most macabre piece in the sale; a rare 18th century wax model of a Franciscan monk: “God only knows what they were doing making wax models of monks in the 1700s. It could have been a bored student in a monastery, but it’s an attention grabber in its own right” says George Fonsie Mealy (€150–€200).

The timing of lot 289, The Trade Unionist by Harry Kernoff, is opportune, considering the outcome of the recent general election, and how the next government will face a series of industrial relations challenges in the months ahead.

The painting of a stern-looking man in a bowler hat with a poppy in his lapel, appears identical to the one sold in 2004 for €4,700 through Whyte’s. The estimate in the Fonsie Mealy sale is €600-€800. fonsiemealy.ie