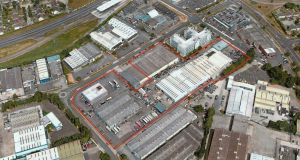 Businessman Joseph Costello has begun consultation with An Bord Pleanála regarding plans to construct 1,156 apartments at Cookstown Industrial Estate, Dublin 24, under the fast-track planning process. If successful the proposed development will be one of the largest planned residential developments in the State.

Mr Costello has assembled a substantial development site of about 2.92 hectares (7.22 acres), which is occupied by numerous several industrial buildings and enjoys substantial frontage on to three roads.

Mr Costello owns a number of the properties personally, while others are held by his company, Absolute Limousines. The properties appear to have been acquired in various transactions, including the purchase of a large industrial property and filling station, occupied by Circle K, on Old Belgard Road in 2015 from a receiver. According to accounts filed by the receiver, €1.55 million was paid for the 1.23 hectare (three-acre) property.

The site is 300m from Belgard Luas station and close to the M50 motorway. An Bord Pleanála will consider the businessman’s development plans before deciding by March 16th if it is in order for Mr Costello to submit a full planning application through the Strategic Housing Development fast-track system.

This is the second time that development has been planned for the Cookstown site. In 2008 an entity named Cookstown Development Group sought planning permission for a portion of the site with ambitions for a 31,950sq m (344,000sq ft) mixed-use scheme incorporating 217 apartments, retail and office space and a two-level basement with 860 car parking spaces. Planning permission was refused by South Dublin County Council in 2008, and by An Bord Pleanála in 2009.

Mr Costello is also seeking permission for 245 build-to-rent apartments elsewhere in the Cookstown Industrial Estate, namely at Units 66 and 67 Fourth Avenue, through a company named Pyrmont Property Development. A decision on that scheme is due in February.

Both domestic and international investors alike have set their sights on well-located industrial properties in hopes of securing lucrative planning permission for residential developments. Cookstown Industrial Estate has seen a flurry of planning applications for residential developments. Bartra Capital Property and Steelworks Property Developments have previously entered into consultation processes with An Bord Pleanála for the building of hundreds of new homes in the estate.

What sold for €250k in Drumcondra, Swords, Kilkenny, Waterford and Sligo?
Real news has value SUBSCRIBE