Chance to bag a bargain online from Whyte’s 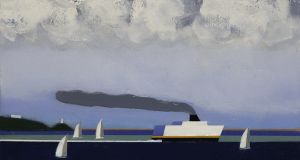 The current on-line auction of Whyte’s of Molesworth Street, which will end on Monday, February 17th, has quite a selection of Irish and international artists. The near 200 lots with estimates from €100-€1,000 – with the bulk of works under €500 – is a great way for those starting an art collection to buy works at reasonable prices.

First up are 15 simple gouache works by Markey Robinson, which at €200-€300 each is an opportunity for those with limited budgets to purchase a work by the late prolific artist.

Some 26 artworks that were originally the property of Irish Anglo Bank in New York also feature. They have been placed in the sale by liquidators of the Irish Banks Resolution Corporation. While many of these would have been chosen as interior design pieces rather than for their aesthetic merit, the three works by American artist Kathleen Dunn of moody sea and landscape scenes are particularly nice. (Lots, 44, 45, and 46 are all listed within the €100-€200 price bracket).

Also featured are two paintings by David Clarke, who was born a century ago this year. His father, Harry Clarke, was Ireland’s most celebrated stained glass artists, while his mother, Margaret Crilly Clarke, was in her own right a significant Irish artist, and one of the founding members of the Irish Exhibition of Living Art.

The two works by Clarke, who ran his fathers stained glass studio until it closed in 1973 due to a decline in orders, are lots 82 and 83 (Puerta de la Independencia Madrid and Still Life with Candle) listed at €500-€700 and €400-€600 respectively.

Further familial connections are two works by Rowland Davidson, father of visual artist Colin Davidson. Lots 124A and 125 are Fair Day and Downings Co Donegal – a particularly nice maritime scene of a boatman – which are seeking €800-€1,200 and €500-€700.

Another interesting maritime scene is Dublin Bay (Ferry Departing, Sailboats) by George Potter from his Dublin Bay series. American-born Potter moved to Dún Laoghaire in 1971, and became a part-time lecturer at the National College of Art and Design from 1975 until 2000. Many of his paintings reflect his fascination at the relationship between land and sea (€700-€900).

Also featured from the estate of the late silversmith Pádraig Ó Mathúna is Nude (1959) by Limerick artist Jack Donovan.

Donovan, who died in 2014, was one of the city’s most prominent artists. As head of the Limerick School of Art, where he began as a student in 1951, Donovan taught many students, including John Shinnors and Henry Morgan, until stepping aside as head of the college in 1972 (lot 92, €300-€500).

Sick of plastic packaging? There’s a shop for that
9