Kildare, Meath and Wicklow continue to be in huge demand from people working in, but priced out of the city 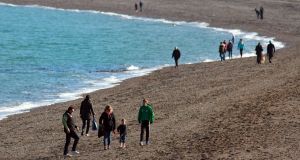 Greystones remains the most popular location in Wicklow for house hunters

While a limited number of new homes schemes in the capital might be within striking distance for first-time buyers in terms of their affordability, Kildare, Meath and Wicklow continue to do the proverbial heavy lifting when it comes to addressing the demand for housing of those working in, but priced out of the city.

There are 53 developments to choose from across Dublin’s three main commuter counties, with prices ranging from €227,500 for a three-bed house at Landport Estates’ Cluain Dara scheme in Derrinturn, Co Kildare, to starting prices of €990,000 for four-bed houses at Glenveagh Homes’ Marina Village scheme in Greystones, Co Wicklow.

There’s also plenty on offer in between those price points to suit the pockets and the living requirements of everyone from singletons to couples, to families and downsizers.

In terms of major new home developments, Bennett Homes’ delivery of 360 four and five-bed semi-detached and detached houses at Effernock, Trim Co, Meath, should prove popular. Prices at the scheme start from €365,000, and sales are underway.

Greystones remains the most popular location in Wicklow for house hunters. The seaside town and its nearest neighbour, Delgany, have a number of new home schemes to choose from, including Eastmount, which is under development by D-Res Properties, and Churchlands,  which is being developed by local builders the Wood Group. Located on either side of Chapel Road, in Delgany, the two schemes offer three and four-bed houses with prices starting from €485,000 in Eastmount. Prices at Churchlands have yet to be confirmed.