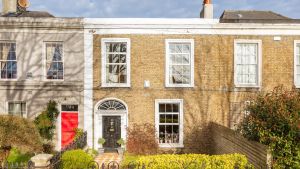 Windsor Terrace is one of the nicest stretches in Portobello. The fact that it is a cul-de-sac means the only cars are those of neighbours, which makes it less busy than the many rat runs in the locality used at peak traffic times.

In addition, when the trees along the canal are back in bloom, they act as a canopy hiding much of the traffic on the other side of the water.

Number 20 is a 149sq m (1,604sq ft) property that has been home to the same family for 70 years, and could do with upgrading. In its current layout, it has three bedrooms, two reception rooms and the bathroom lies beyond the kitchen at hall level.

The finest room in the house is the principal bedroom upstairs which stretches the full width of the property. It overlooks the canal and, as if on cue, a bevy of swans swooped down to land on the water right outside the windows while viewing.

There are three options with this room, which is the largest in the house. You could retain it as the principal bedroom or cut it into two bedrooms. They would each have a window and remain of a generous size. This would free up the bedroom on the return to become a family bathroom – as there is none upstairs.

The third option would to reinstate the room – to its original purpose when the house was constructed – as a wonderful light-filled drawing room with superb canal views.

The fact that the front of the house faces south means that the reception room downstairs looking on to the rear garden is quite dark and could be used as a bedroom in exchange for this room upstairs.

The house could also be extended – subject to planning – though the rear garden is not very large but could, with the use of a good architect, become something special.

The location needs little introduction and everything from the National Concert Hall, art galleries, theatres, yoga classes and eateries are within walking distance, which is one of the reasons the area is so popular.