‘The building boom is back. It took us 14 months to find a builder’ 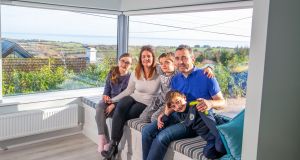 The Deacon family in their home on Tara Hill, Co Wexford. William and Gráinne Deacon with their children Sam (12), Aoife (11) and Adam (9). Photograph: Patrick Browne

Most houses are laid out with the kitchen and living areas downstairs and the bedrooms on the first floor, but when your house is located in an area of spectacular natural beauty it makes complete sense to turn tradition on its head and live in an “upside-down” home.

And this is exactly what Gráinne and William Deacon did in 2007 when they moved into their house on Tara Hill, near Gorey in Co Wexford.

But while the 150-year-old farmhouse with sea views was perfect for the couple, as the years went on and their three children – Sam (12), Aoife (11) and Adam (9) – arrived and grew, they felt they needed more space so decided to embark on a refurbishment project to both modernise their home and make more use of the available space.

“We have the hills and the sea on our doorstep, so our house is upside down to take advantage of the views,” says Gráinne, who works in Dublin as a regulatory consultant. “Prior to the renovation there was a big open-plan room upstairs encompassing living, kitchen and dining along with three bedrooms [downstairs] and one bathroom. It was perfect when we bought it, but we didn’t have children then and it became apparent around three years ago that we needed more room, particularly a separate living space. And it also needed modernising from an electrical, plumbing and services perspective. So we decided to renovate in mid-2016 and got planning around a year later.”

Deciding to renovate was the easy part; finding the right company to undertake the work and getting started on the project was more of a lengthy process.

“It took us 14 months and over 10 tenders to find a builder,” she says. “The quotes varied enormously, some were triple what we ended up agreeing with our builder, so the building boom is definitely back. Although, some builders were possibly nervous given the age of the house. Then when we did get the digger in to dig the foundations for the extension, we discovered there were actually no foundations for the original house at all and it was simply built on mud and large rocks.”

But while its age may have caused some teething problems, it also meant solid walls and structure. And once work got underway, Gráinne and William, a self-employed accountant, were delighted to see some of the history of their house reveal itself as it began to take on a new look.

“Unfortunately the house didn’t have many period features left when we bought it as the previous owners had renovated it before us,” says Gráinne. “But the walls are about two feet thick and it was amazing to see the dirt floor downstairs just under the floorboards when they were taken up.

“We got working with an architect and had some plans ourselves, such as our large picture window, which was my husband’s original idea. We told the architect what we needed and what we wanted and now have an amazing kitchen with loads of storage as well as an island and the room is now very functional, whereas previously the kitchen was tiny.

“I also have a utility room which really makes a difference as I work full time and commute to Dublin, so I am time-poor especially when it comes to housekeeping. And there are now four full bedrooms, a large kitchen/dining/living room as well as another separate living room for the children and an office. And prior to the renovation we just had one bathroom but now we have an en suite and an additional guest toilet.”

During the build the family moved in with William’s father for seven months as the interior had to be gutted. But once it began to take shape, they had some fun with decorating and getting used to their new living quarters.

“A close friend helped me with decisions on the layout of the kitchen and living space and the interior,” says Gráinne. “And with regard to colours, we used the outside landscape as inspiration, so it is sea themed and is really amazing that the walls inside look many different colours depending on the colour of the sea and the sky. Now it’s very bright and airy and although our extension is small, the house feels much larger with the reorganisation if the rooms, the skylights and the addition of more glass.

“Our favourite thing is the amazing views of the sea out our picture window. The scene is ever-evolving depending on the weather and the sky. And we have a large window seat which the children – and everyone else – love to sit on to read their books and look out to see what is going on. They also love their newly-renovated bedrooms which are more spacious and they all love having a separate living space, while I absolutely adore my new kitchen and love the fact that I can close the door to the children’s living room and listen to my own music while pottering about. The new layout is very conducive to gatherings given the large open plan upstairs area and I love having people over for barbecues, dinners or any get-togethers really.

“We also have a long narrow garden at the back of the site and a medium-sized garden at the front, both of which we redid ourselves. Luckily we both like gardening as it is quite high maintenance.”

Located just 8km from Gorey, the Deacon home is perfectly situated for all the family needs and Gráinne is thrilled that they had the option of renovating rather than moving.

“Gorey is a wonderful town with great amenities and non-high street shopping and restaurants,” she says. And we are around 1km from the nearest beach, although we usually drive 4km to our favourite one for swimming and a long coastal walk.

“We live directly on Tara Hill so we can walk out the door to many looped walks and I really love this aspect of the location as it is much easier to motivate children if you don’t have to load them up into the car. They go into the woods themselves with friends to explore and make dens and the view from the top of the hill is spectacular on a clear day and is always changing. There are many people around who have lived here for generations and our neighbours are really lovely people who I would easily call on for help, and have done, and vice versa.

“All in all we love the end result [of the refurb]. I l really didn’t want to move so am thrilled now with the house – and so is everyone else, it’s a real transformation.”