London-based Bryan O’Sullivan given the gong by Elle Décor 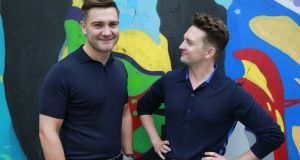 Bryan O’Sullivan (left) and his husband James O’Neil who works with him in the London-based business. Photograph: Nick Bradshaw

London-based Bryan O’Sullivan was named Elle Décor Interior Designer of the Year this week, an award in the design community akin to the Oscars. “It hasn’t fully sunk in” the Irish designer told The Irish Times. “It’s like I am still in a state of shock, but I am absolutely delighted – and it’s a tribute to the guys in the office, you are only as strong as your team.”

O’Sullivan who set up his practice in London in 2013 has been steadily building up an impressive international portfolio of work – from hotels, residential properties and apartments to yachts and private jets. From a modest beginning with four people and his first big project (a private villa in Ibiza), he now employs over 20 – architects, product, furniture, graphic and lighting designers, seven of whom are Irish. “We have just opened a small office in New York and are working on residential properties in the Hamptons and offices in Manhattan on 5th Avenue. I seem to spend a lot of time on the move at the moment,” he says.

Current projects include a major refurbishment, in collaboration with McCullough Mulvin architects, of Dublin’s 130-year-old Central Hotel on Exchequer Street which was sold to investors in July. “This is a big job, a two-year project, and it will have over 100 bedrooms when it is finished,” says O Sullivan who counts Claridges, the Connaught and the Berkeley hotels in London among his clients. “Paddy McKillen is a brilliant client, he buys into your vision and is a dream to work with,” he says.

Known for a classic, pared-back style, bold and individual, that he describes as “calm, as timeless as possible and not too faddish”, he likes to create spaces that are restful and where choice of materials is key. Many of his suppliers are Irish including Dunleavy Furniture in Kildare and Miller Brothers Stone in Wicklow. Future plans include developing a small line of furniture and lighting.

In the meantime, he has reasons to celebrate other than his Elle Deco win. He and commercial director James O’Neill, partners in life and business, who married last year in Ballynahinch Castle, have just bought their first apartment in the Barbican. “It’s on the 39th floor and overlooking the curve in the river and you can see the horizon and the weather changing and it felt so bright on a dismal grey day. We are finally in our own place and it will be super exciting”.