The rules of engagement rings: know your diamond’s cut and carat

A small, beautiful single carat diamond is much better than lots of tiny little diamonds 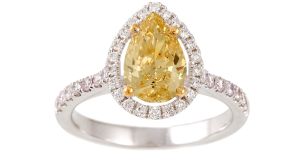 With Valentine’s Day approaching, it is that time of year when many couples are in search of the perfect diamond to mark their betrothal.

The first well-documented use of a diamond ring to signify engagement was by the archduke Maximilian of Austria at the imperial court of Vienna in 1477, upon his engagement to Mary of Burgundy.

Their marriage, which sparked a two-century conflict between the Habsburg and Burgundy royals that resulted in the War of the Spanish Succession in 1710, ended in tragedy when Mary died at the age of 25.

Maximillian, who later became the Holy Roman Emperor, married twice again over the course of his lifetime, but it is thought that he gave neither of his subsequent brides an engagement ring.

While the archduke’s diamond ring influenced those of higher social class and significant wealth to give diamond rings to their loved ones, it was a marketing campaign by diamond corporation De Beers in the 1940s with the slogan “A Diamond is Forever” that had the most profound impact on the nature of an engagement ring, and why many couples still opt for a diamond.

For most of the 20th century, engagement rings have traditionally been round, brilliant-cut diamonds on a simple mount of 18ct yellow gold, platinum and more recently, 18ct white gold. “However, the 21st century is seeing a curve in the direction of coloured stones, including yellow diamonds and rarer pink or blue diamonds for those with deep pockets,” notes Danica Pignetti of O’Reilly’s on Francis Street in Dublin.

While many people focus on a combination of colour, which ranges from D to Z, with D being colourless; clarity, which is the number of inclusions or flaws, and carat weight, the fourth “c”, how a diamond is cut, is a widely undervalued yet crucial factor influencing a diamond’s beauty.

When comparing old cut diamonds against modern round brilliants, you should note that round brilliants are cut in such a way that light enters the diamond and bounces right back out, producing the bright white sparkle that most people associate with diamonds. The sparkle of old-cut diamonds is deeper and warmer, almost glowing in a way that draws the eye into the stone instead of bouncing the light back out.

John Farrington has a wide selection of period-cut diamonds in classical settings at his shop on Drury Street, as well as many art deco styles, and finds that his customers “are looking for unusual and interesting designs”.

The Valentine’s sale at Adam’s on St Stephen’s Green features a whopper of a diamond weighing 6.01cts. Though currently hanging on a pendant, it could be set into an engagement ring: “This marquise is a rare diamond which can also be considered as an investment piece,” according to Claire-Laurence Mestrallet of Adams.

What makes this gem special is that it is classified as a Type IIa diamond.

Scientists classify diamonds into type I or type II, depending on the presence of nitrogen, which can replace carbon atoms in the stone’s atomic structure. It is estimated that only 1 per cent of the world’s diamonds are type IIa – with no measurable amount of nitrogen – making it a very rare item on the Irish auction circuit, and with a €160,000-€180,000 guide price, not in the budget for most couples about to tie the knot.

“In order to be sure that your diamond has the colour, clarity and carat weight, you must either buy your diamond with a laboratory report from a reputable diamond laboratory such as GIA (Gemological Institute of America) or, you rely on the person selling the diamond, who must be a professional gemologist, to have graded the diamond adequately,” advises Claire-Laurent Mestrallet of Adam’s.

For anyone opting to buy a surprise engagement ring for their partner, auctioneer John Weldon in Temple Bar suggests: “Keep the style of the ring simple and classical and go for a ring with no fuss. A small beautiful one carat diamond is much better than lots of tiny little diamonds totalling two carats. Remember the plan is that the woman will be wearing it for a long time, and as style and fashions change, classical styles remain.”

Today many couples prefer to buy a ring together, and an afternoon at an auction is a great way to add a bit of excitement to the buying process.

Purchasing an engagement ring at auction can save up to 50 per cent on the original cost of a ring, as is evident from comparing the original valuation certificate or receipt against auction prices realised.

The Adam’s sale on February 11th is just in time for a Valentine surprise. The auction at O’Reilly’s of Francis Street on February 19th, and John Weldon’s sale on Tuesday, February 25th could be the perfect spot for couples to have a special lunch, followed by a bit of an adventure to find the ideal ring.

Considering that 2020 is a leap year – traditionionally the year that women propose – Adam’s has a lovely Bvlgari ring in size V with pave set diamonds that could do just the trick for a woman or indeed a man, on bended knee to surprise their loved one on February 29th (€2,000-€3,000). adams.ie, jwa.ie, oreillysfineart.com, johnfarringtonantiques.com