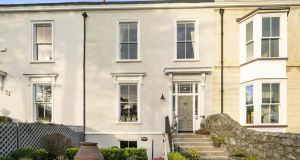 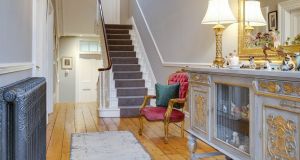 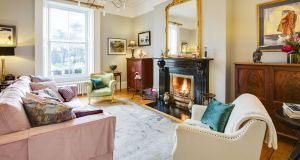 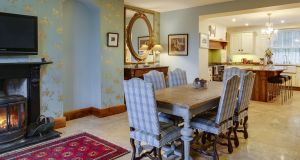 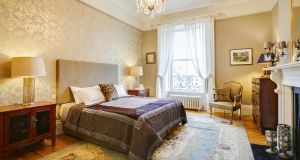 A two-storey-over-basement period house overlooking Clarinda Park and its tennis courts in Dún Laoghaire, Co Dublin, has been completely renovated since its owners bought it 11 years ago. It was rewired, replumbed, reroofed, has a new gas-fired zoned heating system, restored sash windows, and has been attractively redecorated in keeping with its Victorian period. It was repainted last year and comes to the market in fresh condition.

Clarinda was one of the first squares planned in the town when Dún Laoghaire was still Kingstown, and its houses are protected structures. Number 20 has most of its original period features intact. The front door opens into a wide hall with elaborate ceiling cornicing, a centre rose painted the same shade of antique French grey as the walls, a smart contrast to white ceilings, coving and cornicing. It is floored, like all but the basement rooms, with original timber floorboards and has antique-style radiators.

The drawingroom at the front of the house has a large black marble fireplace, grey centre rose with contrasting elaborate white cornicing and coving and walls painted grey. There are working shutters on the restored sash window and views of Clarinda Park. A second reception room behind, used as a TV room/study, has the same high ceilings, plain white coving, a very large white marble fireplace and sash windows with shutters.

A few steps lead down past a smart fully-tiled bathroom on the return, with beige stone tiles, an oval bath and shower. The downstairs hall and kitchen both have stone-tiled floors; the large open-plan kitchen/diningroom runs from the front to the back of the house. The kitchen has white timber units, polished granite-topped island unit and countertops, and a Rangemaster cooker. The diningroom is at the front of the house and has a wood-burning stove set into a cast-iron fireplace. There is separate access to the front garden from here.

There’s another smart, fully-tiled bathroom with a large shower on the upstairs return and three bedrooms on the top floor. The large main bedroom over the drawingroom has a large white marble fireplace with black cast-iron inset, pretty goldish wallpaper on one wall and windows with shutters overlooking Clarinda Park. A second large double at the back has fitted wardrobes and a third, smaller bedroom, fitted out as a dressingroom, has a wall of fitted wardrobes.

The garden outside is small; stone walls are lined with bamboo, and hydrangeas are planted beside high stone walls. There’s an original stone shed in one corner and, opposite, a gate opening into a lane that opens onto Corrig Road. The front garden has also been landscaped, with flowerbeds surrounding a pebbled central area.

There is residents’ on-street parking on Clarinda Park West: number 20 is about halfway up the street, which runs between Corrig Road and George’s Street Upper in Dún Laoghaire, a short walk from the People’s Park and the centre of Dún Laoghaire.