Take control of your home with the Gaff Goddess 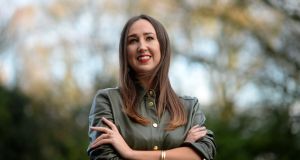 Two years ago, London-based property manager Laura de Barra was going about her everyday work when she decided to record something of a public service announcement on Instagram. “So this is the most disgusting lesson you will learn with a dishwasher,” she started. “If you move in somewhere and you don’t clean it out – and it hasn’t been cleaned out – someone else’s food is being rinsed over your dishes the whole time.”

From there, she filmed herself removing stagnant water from a dishwasher and sprinkling dishwasher salt over the water softener, all the while providing a running commentary on what she was doing. It wasn’t the sort of glamorous content typically associated with the social media platform, but it struck a chord and her followers grew.

“I put it up on Instagram and people were like, ‘I didn’t know you could do this’,” she recalls. “I was like, hold on a second. I thought it was just me and two of my stupid friends that didn’t know this.”

Since then, de Barra has developed a loyal audience on Instagram who tune in to watch her dispense tips on how to clean washing machines and tend to extractor fans. It’s useful and, crucially, relatable.

“The problems that I solve are things that everyone experiences,” she says. “It’s not just me sitting in a beautiful house with beautiful things around me and people who don’t have it or can’t relate to it watching me. It’s me getting filthy being like, ‘This is how you fix this’.”

Her book, Gaff Goddess, is a compendium of tips and tricks to help the reader take control of their home. She outlines everything from how best to deal with household nuisances like mould, to how to fix a dripping tap. Written in a sassy, straight-talking style (think Jonathan Van Ness meets your older sister) and accompanied by her own illustrations, the book was envisaged as an antidote to other books on the market that are either too utilitarian or patronising to women.

“There was nothing fun out there,” she says. “It was either the driest, ‘This is DIY’ or ‘Oh my God, girls! Pink tools!’. I was like, ‘I’m not her and I’m not the girl who’s going in there with the lads either. Where is the glam bit?’”

Originally from Cork, de Barra studied fashion in Edinburgh before moving to London in 2013. She started designing clothes for high street shops but when the high street started embracing fast fashion, she checked out. “We would be getting emails at night from buyers like, ‘Kylie Jenner has just worn this bikini, can we get it in?’” she says. “That’s not fashion. That’s just supplying consuming. I was like, I’m so bored now.”

Her boss offered her a new position overseeing a property portfolio. At first, she was supplying decor packs to new properties but that quickly evolved into buying and managing property. These days she looks after about 30 properties in London and is responsible for everything from assembling flatpack furniture to dealing with tenants.

Prior to taking on the new role, de Barra says she was “handy” though not necessarily a DIY expert but with the help of manuals, blogs and YouTube tutorials, she became a bona fide handywoman. As she acquired new skills, she started compiling a book explaining how to tackle common issues within the home with the intention of giving it to friends. This would prove fortuitous when Penguin Ireland approached her about the possibility of writing a book.

“When I spoke to Fiona [Murphy] from Penguin she asked, ‘Have you ever thought about writing a book?’” she recalls.“So we met and I showed her this little book that was literally taped together.” It would later serve as a blueprint of sorts for Gaff Goddess.

At the centre of de Barra’s book is the notion of She-IY, a term she uses to describe her brand of “camp DIY”. She-IY, she says, is aimed at women and men who are “pretty sassy in their normal lives” but who may feel DIY isn’t for them.

“There are a lot of guys out there that are into camp, fabulous things and they don’t have a home to learn about DIY,” she says. “Or girls who don’t want to be the helpless girl and who want to learn. If they had a problem in any other part of their life, they would learn how to do it themselves.

“This is the book to be like, this is so camp and so easy that you can do it while wearing lipstick and being like, ‘Yaaas!’”

TV programmes and books about home improvement are often aimed at homeowners. With that in mind de Barra was conscious of including renters in Gaff Goddess. A renter herself, she says that those who rent are often the most in need of practical advice on how to fix appliances or transform their space.

For those living in smaller spaces, de Barra offers practical advice. She is a huge fan of zoning (which refers to separating spaces according to function) because it doesn’t necessitate knocking walls but rather arranging rooms to suit individual needs. Think adding a reading area to your living room or creating a space where you can practise yoga.

It all feeds into de Barra’s philosophy of treating your home as a sanctuary and making it work for you and your lifestyle.

“How do you make your day the best it can be within your home? That’s important for me.”

Tips for taking control of your home

1. If you are taking something apart for the first time, make sure to photograph it or make a list of all the steps you take as you disassemble it. That way you will have something to reference as you’re putting it back together.

2. Want to keep your tools rust-free? Toss a few packets of silica gel – yes, the ones you get with new shoes – into your toolbox and it will help keep the moisture levels down in your toolkit, which means no reduced oxidation.

3. If your dishwasher is in need of a thorough clean, place a cup of bicarbonate of soda on the bottom shelf of the dishwasher and run a short, hot-water cycle. If you need an extra boost, place a cup of vinegar on the top drawer in the same wash and let them work their magic. This will give a deep cleanse to the parts you see as well as the ones you don’t such as the filter and pipes.

4. Looking to add a splash of colour to your house on a budget? Look to luxury brands to see what colours are on trend at the moment and seek out affordable paint dupes at your local store.

5. Looking for a tradesperson to do a job and don’t know where to start? Consult the professionals. For instance, if you’re looking for a carpet fitter, ask your local carpet store if they have any local fitters in their black book. Birds of a feather flock together so if you’ve had a great contractor previously but they don’t have the trade you need now, always ask them if they can recommend someone for the job. They will usually be of the same standard.