At home in Brisbane: tropical heat the right climate to build a cashmere brand 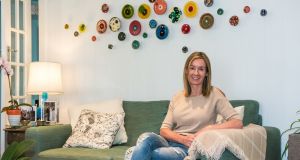 During her career in finance, Dubliner Caoimhe Ryan got to do her fair share of globetrotting living in London, New York and Hong Kong before settling in Brisbane on Australia’s Gold Coast.

Along the way, almost accidentally, she set up Nuan Cashmere, a luxury fashion and home brand that is made in China, marketed in Australia and sold across the globe.

She grew up in an old house in Foxrock with period features and that has led her to a love for what she calls “the story of an old house” but with contemporary kitchens and bathrooms.

Ryan left Dublin for London where she started working on the stock market which led to work on the Latin markets and an approach to head up a team in New York with time spent in Mexico, Brazil and Argentina.

Reminders of her time in New York hang on the walls of the Queensland house she shares with her second husband, Simon, and her four children.

The cashmere story was born in Hong Kong where, at the dawn of the new millennium, she and her then husband arrived, having left London behind. With southeast Asia on her doorstep she and her family travelled and it was while on holidays in the Maldives that she met a woman wearing a gorgeous cashmere robe. She admired it and the woman offered to get her one from Shanghai. Back in Hong Kong her friends so admired it that they asked her to get more.

“The climate there is tropical but the houses are not built for cold weather. While there can be highs of 40 degrees there can also be lows of 10 degrees, which can feel freezing. Many of the homes don’t have any heating so in winter it can feel like you’re living in the garden shed,” she explains.

She started selling at charity events and ended up with a database of clients. “I kind of stumbled into it and it has been growing since.” Soon she was sketching up ideas and a design brief that she converted to Mandarin using Google Translate and would message her designer using WeChat, a Chinese version of Whatsapp.

“Young girls bought it for office wear in environments where the air conditioning is high as it falls into professional attire criteria.” The robes were a big hit with most of them worn as “coatagins”, a cardigan/coat hybrid.

The selling season for her designs was September to March and, when she split up with her first husband in 2011, a friend in the fashion business who had run American luxury brand Coach’s Asian office offered to help her turn her idea into a proper luxury brand. He helped her come up with the name, Nuan Cashmere, and showed her how to set up an inventory management system. It was a lucky break as it meant she could manage stock as well as keep on top of the financial and cash-flow sides of the business.

A big perk of living in Asia was the opportunity to travel and she picked up lovely bits of art and mementoes that now decorate her Australian home – so much so that she could do themed rooms in her house, the Myanmar phase, the South African phase and so on but she prefers to mix it up.

On meeting Simon she says, “If you’re not looking you find things”. He got in touch from Brisbane after her sister had thoughtfully signed her up to an online dating site. His mother had been Irish and his dad was living in Clonakilty.

“For me he was more of a pen pal. He lived on a different continent but he became someone to chat to and we became really, really good friends. We started a long-distance relationship and got engaged in 2014,” she says.

Their house in Brisbane was built in the 1850s and had lots of character including lacework ironmongery, characteristic of Australian homes.

Inside, the house has gum tree flooring, and a teak floored verandah with tropical hardwood furniture. In the living room is a model of the Titanic that she bought in an antiques shop in Hong Kong as a gift to her husband. The coffee table is solid stone and houses an ethanol fire that she lights in winter. There’s an Asian ox that she brought back from a half marathon in Angkor Wat in Cambodia. She had the sofas made in Hong Kong and on them sit some of her own Nuan brand squishy square cushions (about €175 each for a plain knitted design, cable and ribbed versions, €201 each). On one wall above the sofa is Petri Series, a resin-based work by San Francisco-based Klari Reis.

The stained glass panels on either side of the front door are replicated in the window of the stairwell, where a painting purchased on a trip to Vietnam hangs. On the landing is a Burmese wooden Buddha, an 18th-century Shan Period piece, bought in a gallery in Hong Kong where she also purchased the 19th-century Burmese bronze riders.

The house is still a work in progress and the next job is to remodel the kitchen, she says.

Upstairs, in the master bedroom is a king-size cable throw, luxury bedding that feels light as air. These come in two shades of grey and can be pre-ordered from her Nuam Cashmere website for €1,070. It looks and feels great but how do you keep moths at bay? “Before storing it away, wash it and dry it flat. Then iron it to kill any eggs.”