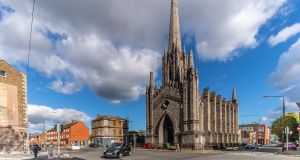 Residents of Dublin’s north inner city are appealing to An Bord Pleanála against a decision by Dublin City Council to grant permission for a co-living development flanking the former Black Church at St Mary’s Place. The Durkan scheme generated 25 individual objections as well as an observation by An Taisce.

The council’s planners required the number of units to be reduced from 121 to 114, but residents of the Mountjoy Street area are still unhappy. They maintain that the area has become “completely overwhelmed” by schemes intended for transient living, including five student housing blocks, two hotels and three hostels.

There is also concern about the impact of the proposal on the Black Church itself — designed by John Semple and mentioned in Ulysses — even though it was deconsecrated in the 1960s and is now used as offices. Ironically, the former church was used as a venue to display the first development plan for Dublin City in 1967.

Graham Hickey, conservation officer at Dublin Civic Trust, who was writing in a personal capacity, said the replacement of a three-storey derelict building on the corner of Mountjoy Street by a five-storey block designed by PA Architects “with an utterly incongruous glazed tower-like structure exhibits, quite simply, zero reference to context”.

Although it has been in the planning process since last December, there has been a notable increase in planning applications for co-living schemes over recent weeks due to fears among developers that the new Minister for Housing and Planning, Darragh O’Brien (Fianna Fáil), takes a more jaundiced view of the concept than his predecessor, Eoghan Murphy (Fine Gael).

It is understood that a major review of Murphy’s regulations permitting co-living schemes is now under way, particularly in the context of the current pandemic. Unlike Murphy, who once likened them to “very trendy boutique hotels”, O’Brien is dubious about the idea of residents sharing lounge and kitchen facilities and running the risk of contracting Covid-19.

‘Therapy completely changed my life, once I gave it my all’
3

Missing your grandchildren during lockdown: ‘The pain is physical’
10