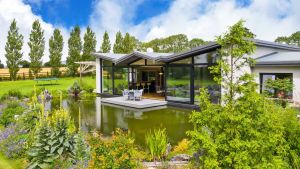 When Susan Dunne and Tony Cronin first met architect Stephen Carr to discuss ideas for the house they wanted to build on their rural Co Wexford site, they outlined visions of a striking, high-spec, three-bed modern family home that would be sympathetic to its surroundings.

The resulting 347sq m (3745sq ft) house, which was designed by Carr and completed in 2015, ticks the boxes on all those fronts.

The single-storey building is a bold presence on the 4.37 acre site, though its undulating roof, which mirrors the surrounding rolling countryside, brings a sense of fluidity and movement to the building that’s enhanced by the large manmade pond that allows the house to seemingly “float” above its surroundings.

The property is located at Killabeg, a townland with a postal address in Ferns. The historic north Co Wexford town is 6km away, as is the larger town of Enniscorthy.

A juxtaposing of modern and classical, tailored and natural, is an interplay that kicks off the moment you slip off the quiet country road that leads to the front gate. Retro estate-railings and gates bookend a pair of understated granite gate posts. The setting is idyllic, quiet and rural, but at just five minutes’ drive from the  M11 motorway, it’s a commutable one-hour drive to the M50 and south county Dublin.

Through the gates, the long sweeping driveway is lined by lime trees. A huge granite rock sits prominently at the point where the drive opens to the house front.

The owners are a couple and professional team who run construction company Tomsollagh Developments, as well as an engineering business. Dunne touches the granite rock as she tells the story of its provenance. They had been working on a project at Glendalough, and the rock was cut from an even bigger one that was too big to lift from the foundation. Project managers with less of an eye for potential and detail might have had the rock smashed. They hired a specialist stone mason to split the rock. Closer inspection reveals a subtly-worked bird bath which the same craftsman carved into a shelf in the rock.

Surrounding the house on its generously-proportioned site, there are wide stretches of lawn interspersed with clever planting – the work of Bloom award-winners, Oliver and Liat Schurmann of Mount Venus Nursery. Much of the planting is edible, with the banking of grouped flowers, vegetables, herbs and shrubs complementing the mature trees that border the area.

Internally, a porcelain-tiled entrance hall leads into an open-plan living-dining-kitchen area. The kitchen is a feature in itself, with custom-made units and designer work areas built slightly taller than standard height. It’s a small detail, which puts an assertive stamp on what might otherwise be a purely-functional space.

There’s an eco-friendly Unico heating and cooling system that keeps the entire building at a comfortable temperature 24-7, year-round, for a fraction of the cost of fossil-fuelled options. There’s underfloor heating in the bathrooms. The bedrooms are attractive, with a very striking master bedroom which features a novel and visually-gorgeous backlit Onyx-stone-fronted bath and built-in walnut units.

Other features/spaces worthy of mention are the office with a hideaway double bed, a generous car port, utility room, a second full bathroom and walk-in pantry. There’s also a recreational room, which is large enough to serve any number of purposes – an additional bedroom, games room, or separate den/sitting room for example.

From the open-plan heart of the house, the area opens to the outdoors via double sliding doors in a wall of glass that overlooks the man-made pond which laps the threshold. One step outside onto a deck that appears to “float” on the pond and you could almost forget the impressive contemporary structure behind you. Dragonflies dart about, skimming the rippling surface. Swallows, too, are drawn to the water where they dip and dive in a lively spectacle. Earlier this year, says Susan, a pair of wild ducks would fly in daily for an evening bathe.

As a couple and working partnership, Dunne and Cronin are a pair who relish the excitement of challenging, “different” building projects. They are driven by attention to detail in their day-to-day working lives and and that’s on show here, where the accommodation is finished to an excellent standard.

Asking €950,000 through Wexford agents, Kehoe & Associates, the work ethic reflected in the quality of this build, along with its setting and location, make it a property that has much to offer a potential buyer.