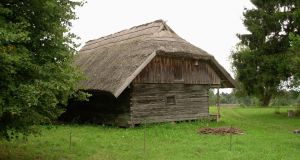 I’ve recently been salvaging a large plot of long-neglected garden, completely overgrown with brambles, weeds and self-seeding trees. The previous owner was a landlord who used part of it as a general dumping ground for excess building materials and piled so many inches of waste thick upon the ground that excavating it all has been a bit like an archaeological dig.

One of my maintenance team spent weeks filling multiple skips with waste materials and slowly uncovering the original design of the garden: there were buried pathways and white rockeries that slowly rose into view, circular stone areas and even a half-buried pond, filled with silt and a couple of large frogs. A highlight of my day became calling down to the site and seeing if anything else intriguing had been brought to light.

A patch of ground next to the neglected garden had also been used for fly tipping and burning rubbish – we pulled out burnt mattresses and gate hinges, piles of roof tiles and glass bottles, buried in the charred earth. Having removed the overgrowth and cleared out the waste, it was time to scrape and level the plot with a digger, ready for replanting and returfing.

I looked into cabins with up to three bedrooms, a bathroom, a lounge and a modern kitchen. There was even an attractive balcony for knocking back drinks on summer evenings

I began to think what I would like to do with this plot surrounded by trees: I’d landscape the gardens, I thought, but might also like to erect in one corner some type of garden building. I started looking into summer houses, then considered something with a residential potential that would fit in with a garden setting. This led me to enter a previously unknown area – the world of log cabins.

When I think of log cabins, my mind rushes first to Charlie Chaplin in The Gold Rush, feasting on a leather boot. I think of holiday parks and eating sandwiches in caravan-like constructions next to the beach while it pours rain outside on a typical summer’s day. The outdoor cabin always seemed a shade up from a shed.

But log cabins have been undergoing a considerable boom in recent years and I soon discovered that there are luxury models that people live in year round. I looked into log cabins with up to three bedrooms, a bathroom, lounge and modern kitchen. There was even an attractive balcony for knocking back drinks on summer evenings.

One of my team is from Eastern Europe, which provides much timber for log cabins, and is a pioneer in their design. She proudly showed me some fascinating, chic log constructions that exist deep in Lithuanian forests.

Apparently the Covid-19 pandemic has been a further spur to the log cabin industry. While self-isolating at home and gazing out into their gardens, people have naturally begun to consider whether they really need to schlep into their city centre offices at all, and couldn’t just conduct all their business from a home office in a log cabin in the garden.

I started dreaming of what it would be like to create a kind of luxury woodland home surrounded by garden and trees. Fine in summer perhaps, but would it really be the kind of place that people would want to live in during the cold winter months? And yet I thought I would give it a go.

I began doing research on outdoor cabins and became quite interested in all the different materials that have been used in their construction. In the Victorian age for example, a brilliant engineer called E T Bellhouse pioneered prefab huts made of iron and exported them to the California Gold Rush and Australia, where they took off.

Will it really be worth all the hassle of digging drains and running power lines just to achieve a single storey outdoor building?

A gable-roofed cottage made by him, measuring 4m by 8m, is preserved in the Portable Houses Museum in South Melbourne. The widespread use of corrugated iron roofs across Australia is perhaps partly thanks to him.

When Prince Albert first encountered one of Bellhouse’s outdoor buildings at the Great Exhibition in London in 1851, he was so impressed that he decided that he absolutely had to have one for a new Scottish pad called Balmoral that he and Queen Victoria were then in the process of acquiring. One of Bellhouse’s handsomely designed huts, specially ordered by Prince Albert, apparently still stands in the grounds of the royal estate at Balmoral and was, rather incongruously, initially used as a ballroom.

I started entertaining the dream of seeing if I could reproduce the design of this iron Balmoral hut in timber for my wooded, garden setting. Will it really be worth all the hassle of digging drains and running power lines just to achieve a single storey outdoor building? But now that I have log cabin fever, the idea just won’t let go.

Clearly, when it comes to log cabins, I have majestic ambitions. It will be rather fun to think that a patch of land once used as an unloved dumping ground can one day sport a log cabin that is a distant cousin of one owned by a queen.

Damian Flanagan is a property investor, writer and critic