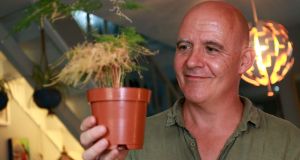 The lowest point came when I force fed one of my plants orange juice. I may not be the most green-fingered of folk – despite the fact that I come from a long line of professional gardeners – but even I knew straight away that dousing a delicate looking ferny thing in sticky orange gloop was a bad move.

It was entirely accidental. I was absent-mindedly loading the dishwasher with the ferny thing keeping me company on the draining board because I had grown concerned about its well-being.

I picked up an infant’s sippy cup which was full of – what I assumed – was water, so rather than pouring it down the sink, I decided to do my (tiny) bit for water conservation and used it to feed the plant instead.

It was only after I had emptied the cup entirely that I realised it was juice.

Horrified, I picked up the plant. I shook it violently. Then I ran it under tap. I even gave its wispy strands an urgent trim to purge them of stickiness but as I carried out the planty equivalent of CPR I knew I was losing the fight.

The plant didn’t flatline immediately but within hours some of its once green tendrils were brown and within a day, there was only the merest hint of green anywhere on the pot plant. Weeks on it is still alive but clearly unhappy about it.

Days earlier the fern and nine other houseplants which, in recent years have become the type beloved of Instagram users across the world, were delivered to my home by Sam Smyth from the Urban Plant Life garden centre in Dublin 8.

“You have very green fingers,” he said looking at the plant pots on the footpath outside my house.

I thought he was being serious until I looked at the plants. They had struggled through a cold hard winter and an almost equally cold spring and were not the better for it. They were all either dead or dying save for a remarkably hardy red geranium. I realised he was winding me up.

I explained that my outdoor plants were in a state of transition but he arched an eyebrow. He was right to look unconvinced. If I was being honest I would admit that the only transition the plants were making was from being alive to being dead.

“These indoor plants should be easier to mind,” he said. “They’re a lot like humans, all they need is a bit of water and a lot of light. And the spider plants are impossible to kill.”

I resolved to keep him away from my kitchen and the dead spider plant in it.

As he drew his comparison between plants and humans, the press release from a UK-based online plant retailer which gave my editor the idea of having me look after some houseplants came to mind.

“The rise of urban gardening is not one to be ignored,” said Andy Baxter, of Internet Gardener. “Recent news has frequently discussed how millennials are choosing plants over children, and with a crumbling housing ladder forcing younger people into small rented accommodation, it’s no surprise they want a plant or three to comfort them. As we can see the Instagram data matches up with sales statistics, it’s quite clear that millennials and gen z jungalow owners alike are using their disposable income on some green company.”

Comparing growing plants to rearing children is, obviously, ridiculous but Baxter’s use of the word “jungalow” was of more concern. If ever there was a word that should not be allowed to catch on it is jungalow.

The release went on to say that millennial interest in all things green has grown so much that plant retailers in the UK have been selling out of certain species with waiting lists for some popular plants getting longer.

Earlier this summer, the top 50 posts from almost 6.1 million images across five hashtags were analysed by Internet Gardener to see which featured most frequently. The Swiss Cheese plant came out on top followed by the Princess-Blue. Then came the Chinese Money Plant, Devil’s Ivy and the Boston Fern.

The social media platform is virtually groaning under the weight of all the greenery. And suddenly so was my house.

Instagram makes plants look beautiful and they are now being used by self-styled influencers as another accoutrement to showcase the perfection of their lives. But as with pets and relationships, plants require care and attention and what looks beautiful in the shop or in an insta-story can quickly become sad and wilted.

That is certainly my experience.

After Smyth handed me a jungalow to call my own I carried the potted plants into my house. I was overly ambitious with my load and dropped two of the pots, scattering soil and leaves everywhere.

By any measure it was a bad start.

The next task was to find places for the plants to live. Some were hung in the window – to show the world how great I was at rearing plants – with the rest placed strategically around the living room.

Then I anxiously wondered if I should water them and if so how much water would they need. Playing it safe, I gently sprayed instead of dousing.

On day two I moved all the plants and together we chased the sun around the house. I sprayed them again. I was determined not to over-water. But the soil was looking dry so I fed everything jugs of water. It raced through the pots and spilled all over the floor, the window frames and the furniture.

It was most stressful for the plants – and for people living with me.

“There is literally water everywhere,” my wife told me with a hint of exasperation. “You’re supposed to be watering the plants not the furniture. That’s not going to grow anymore.”

After a week of constant attention my plants were not thriving. They were not dead but they were definitely not instagramable so I turned to Irish Times gardening guru Fionnuala Fallon for help.

Straight off she explained that the “vast majority are killed by either complete neglect or they are killed by kindness, especially over-watering. Over-watering causes the roots to rot and slowly but surely kills the plant.”

“That hugely depends on the time of year as well as on the particular species or variety. But as a general rule, it should be more in spring and summer but much less in late autumn and winter. The aim is to let the compost almost – but definitely not totally – dry out in between generous waterings. So don’t leave pots sitting in a saucer filled with a puddle of cold water as they won’t like it.”

When she was studying “in the Bots” or the National Botanic Gardens in Glasnevin – where, incidentally five generations of the Popes worked, going right back to the 1830s – she told me she and her classmates “were always taught to gently stick our finger in the compost to check for dampness. It shouldn’t feel sodden but just slightly damp. Another good gauge is the weight of the pot. If it’s really light when you pick it up, it would suggest that the compost is over-dry. If it’s really heavy, it suggests it’s been over-watered.”

She said spraying and misting on its own – which I had been doing – “is definitely not enough to keep most plants alive but is very beneficial for leafy plants in a dry room as it increases humidity”.

She told me that a “classic pressure point for indoor plants is the weeks immediately following their purchase, when they need to adjust to often dramatic changes in growing conditions. Many would have been propagated in warm glasshouses with ideal conditions so they get a shock to the system when they come into an average house where temperatures naturally fluctuate and light levels will vary. This would explain why some of your plants aren’t looking too happy.”

I don’t tell her I dropped several of the plants as I brought them through my house.

“But don’t give up on them yet as they usually rally, just make sure they’re regularly watered. But not over-watered. Another classic ‘danger time’ for indoor plants is when their owners (ahem) go away on holidays. To prevent them from drying out in your absence, collect them together, and place them on a couple of large towels in the bath and then give them a good water, allowing any excess water to soak into the towels. You want them sitting on damp towels and perhaps an inch or so of water so that they can wick it up as they need it.”

Days later I go on holidays. And despite my best intentions, I completely forget about her advice and the plants are left hanging where they are.

Miraculously when I return home after 10 days away the plants have staged a remarkable recovery – well most of them. The ferny thing I fed orange juice to is still not right. I can’t imagine it will ever be right again.