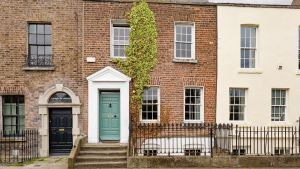 While just a block from Ranelagh’s main drag, Old Mount Pleasant, a terrace of Georgian houses secreted behind a gated green to the side of landmark pub The Hill feels miles away from the village’s busy centre.

When colour expert and interior designer Olha Kelly bought number 4, a mid-terrace, three-bedroom, two-storey-over-basement house in 2008 she was looking for a renovation project and worked with the Georgian Society to help restore the property in a manner sympathetic to its status as a protected structure. This included working from a heritage paint colour palette that is nuanced throughout.

At garden level, she exposed the original beams, which bear carpenter’s marks dating the house to 1784 and installed a kitchen painted a French Grey with its island, which has a butcher’s block top, picked out in Stiffkey Blue, both Farrow & Ball colours, a brand Kelly had worked on several years earlier in Dusseldorf, helping to set up the paint company’s shop in the German city. A sunshine yellow Smeg fridge adds a pop of colour.

There is access to the garden from this level and it is laid out in flagstone slabs with steps leading up to a second level where a balustrade has been painted a summery cornflower blue, a colour its source, American paint company Benjamin Moore, calls Mountain Laurel. The front door also wears this summer shade.

The flooring throughout is pitch pine boards salvaged from a mill in Northern Ireland and that she bought at Wilson’s, one of the province’s best yards for heritage finds. These have been stained a rich espresso shade.

In the adjoining living room, the ceiling beams are partially exposed and the walls wear coats of Pointing, another historic colour from the F&B palette.

Kelly specialises in colour consultancy and has an ability to juxtapose nuanced shades together. She also works with paint merchant MRCB where she can advise on the pros and cons of each of its paint brands.

She also worked on showhouse schemes with design companies Ventura and Elk House, as well as with furniture makers Zelouf & Bell and fellow decorator Jacqueline Hall on private clients’ homes.

The bathroom is home to a claw-foot bath and an original Crapper WC and sink, on cast iron supports, all from Wilson’s, and has glass panes in its doors that salvaged by the property’s former owner, local historian, environmentalist and author Deirdre Kelly (no relation).

The first of the property’s three bedrooms is also at this entrance level with the other two bedrooms at the top of the house. These enjoy vaulted ceilings. The master, extends the width of the property, which measures 153sq m (1,655 sq ft) and is asking €875,000 through Young’s Estate Agents.