A very practical approach to gift-giving

Whatever about the practice of gifting household items to your other half, it takes a certain type of steeliness to introduce this lovely Christmas tradition to the chislers 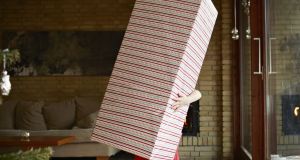 Who wouldn’t want a nice new shelf in the utility room? Or a glass protector for the mantelpiece? And a new vacuum cleaner is something everyone can enjoy. Photograph: Getty Images

Would giving a teenager a couple of outdoor plant pots for Christmas be stretching it? How about a new ironing board? I have a list as long as my arm of everything in and around the house that needs replacing or updating and I’m considering making the most of this special gift-giving season with some really practical presents that will benefit all the family. Who wouldn’t want a nice new shelf in the utility room? Or a glass protector for the mantelpiece? And a new vacuum cleaner is something everyone can enjoy.

Of course, the practice of ‘maximising’ on gift-giving is nothing new to the male of the species. Men have a long and sorry history in this department. Sure what would be the point in wasting money on something you don’t need? Treasured Christmas gifts I have received in the past from my nearest and dearest include a wicker laundry basket, a digital kitchen weighing scales and most memorably a car cleaning kit (with anti-freeze and ice scraper). Somebody had clearly discovered the Aldi ‘specials aisle’.

In the interests of fairness and open disclosure I will admit to having variously gifted in return: a fireside set, a re-chargeable torch and on one particularly disorganised year, nothing. Nothing says ‘I love you’ like nothing. That didn’t go down too well so I won’t make that mistake again. Everyone, it seems, wants something to unwrap on Christmas morning, even if it’s just a set of tea-towels.

Whatever about the practice of gifting household items to your other half, it takes a certain type of steeliness to introduce this lovely Christmas tradition to the chislers. It’s best to start with semi-plausible ideas – a chair for their bedroom, a brand new set of bed sheets, how about a standard lamp ?

Before you know it, they’ll be getting potted plants, tablecloths, place-mats and oh! Isn’t that lovely. A new boiler! well you deserve that, you’ve been very good.

Okay, so larger-scale home-improvement projects may be taking it too far. It’s just too hard to pull off a surprise partial re-wire of the hall, stairs and landing on Christmas Eve, as brilliant a gift idea as this may be (although I have heard of parents who attempted entire bedroom revamps – on the night – complete with curtain changes and new light fittings, with disastrous results). Best avoided until they’re teenagers, when you can pretty much add on a dormer extension without too much notice being taken.

And there’s no need to limit ‘practical’ gift-giving to Christmas. Birthdays are also good opportunities to give something useful.

I once got a briefcase (from my father) as a birthday present. It was to be my new school bag. Brown leather with a brass lock and a plastic handle. All I can say on that front is thank God my class were equally challenged on the ‘appearing cool’ front so I got away with it until in desperation I persuaded him to get me an ‘army bag’ which everyone had. I mean how was I supposed to scrawl “AC/DC” or “The Doors” (neither of whom I had ever heard of) onto shiny brown leather? Not to mention the logistics of trying to get it to stay put on my back (it was a slippery sucker).

Most disappointing present ever

But even that briefcase pales into insignificance when I remember back to the most disappointing present ever. It was Christmas 1982 and at age 12 I knew the pickings in terms of ‘surprises’ would be slim. So all my focus was on an LP-shaped gift which had arrived up from Cork from my uncle and aunt and was lying wrapped under the tree. It was obviously a new record and I was pretty sure it would be The Visitors, the only ABBA album to date which I didn’t have, but I resisted the temptation for a sneak peak. Pity I didn’t.

I can still remember the crushing disappointment, unwrapping that present on Christmas morning to reveal – a record, yes – but not ABBA. Instead, I was looking at a green and orange Celtic-looking cover with the name Seán Ó Riada on the top and something about Eire below. My disappointment if I had received a bound copy of the entire works of Pádraic Ó Conaire could not have been greater. I didn’t even try to play it (still haven’t – sorry Uncle Fintan and Breda! ). Yes I admit (as my grandmother suspected) I was culturally bankrupt.

Which is a valuable lesson if planning on gifting ‘disappointing’ presents this year. At least ensure it doesn’t resemble something that might reasonably be expected to be something else (as in, better). For instance, a small box with expensive wrapping paper needs to contain something small and expensive, not a handy mini puncture repair kit. Best leave those ones unwrapped.

If in doubt, stick to larger household items which even wrapped couldn’t possibly be anything else – a garden spade for instance. “It’s the thought that counts,” says you. Merry Christmas!