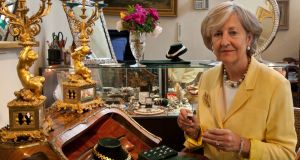 The late Grainne Pierse. “Grainne had a wonderful eye for jewellery and she was very generous with her knowledge,” says silver and jewellery expert Jimmy Weldon.” Photograph: John Searle

Tributes have been paid to antique jeweller dealer Grainne Pierse who died on November 24th after a short illness.

Pierse was a well known figure in the jewellery business having run Courtville Antiques in the Powerscourt Centre in Dublin since the 1980s. She retired earlier this year, but continued to work in the shop on a part-time basis, sharing her expertise with new owner Matthew Weldon of the Weldon family.

“Grainne had a wonderful eye for jewellery and she was very generous with her knowledge,” says silver and jewellery expert Jimmy Weldon. “She specialised in lovely unusual things that you just would not see elsewhere.”

Pierse took over the business from her mother, Catherine Pierse (97), who founded it in August 1964, in Tipperary town in a small chalet on the grounds of her home.

She opened her Dublin shop in 1981 where she quickly become known for her collections of antique diamond engagement rings and Georgian, Victorian and art deco jewellery. She also specialised in Berlin ironwork jewellery which flourished between 1813 and 1815, when the Prussian royal family urged all citizens to contribute their gold and silver jewellery towards funding the uprising against Napoleon during the War of Liberation. In return the people were given iron jewellery such as brooches and finger rings, often with the inscription Gold gab ich für Eisen (I gave gold for iron).

Pierse is survived by by her husband Peter, her mother Catherine (Kitten), her stepdaughters Sara, Liza and Sophie, her loving sister Miriam and brothers Arthur, Gerald, Pat, John and Morgan.

Courtville Antiques was a founding member of the Irish Antique Dealers Association and of the 15 exhibitors at the association’s first fair at the Mansion House in Dublin, in 1966.