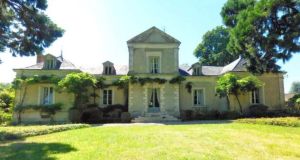 Edward Carey Property is seeking €400,000 for the four-bedroom bungalow below, on 0.5ac, at Blackwater Bridge in Enfield, Co Meath.

In the historic town of Arpino, between Rome and Naples, Palazzo Borromeo, which dates from the 1700s, measures 1,000sq m (10,750sq ft). At ground level are a diningroom and kitchen opening to the garden; a formal diningroom, library and grand salon with painted ceilings, plus various other rooms, including bathrooms, are also on this level. On the floor above are six bedrooms, a livingroom with vaulted ceiling, a kitchen, a study and three bathrooms. There are also two self-contained apartments. The gardens are terraced.
Price €400,000
Agent rightmove.co.uk

In Davenport, between Orlando and Tampa, this house in the gated Hidden Palms estates measures 260sq m (2,800sq ft), and comes with 1ha (2.5ac) of land that includes a pond. Inside are a livingroom with hardwood floors that runs into a diningroom and family room, plus five bedrooms, one of which has an en suite. An outdoor bathing tub looks on to a pool. Orlando International Airport is just over 50km away.
Price $450,000 (about €397,500)
Agent floridarealtymarketplace.com

North of Lisbon, on the west coast of Leiria province, this 470sq m (5,000sq ft) villa sits in a walled garden. Accommodation includes a livingroom and a 56sq m (600sq ft) diningroom with fireplace that opens to the garden, as does the 23sq m (245sq ft) kitchen. There are two more reception rooms (with fires) at this level, along with a study, bathroom and en-suite bedroom. Upstairs are three bedrooms, a bathroom and two sinks. Fruit trees and vines grow in the garden, which has two wells, a barbecue, a wood oven and a six-car garage.
Price: €400,000
Agent iadportugal.pt

Reached via a tree-lined avenue, this 360sq m (3,885sq ft) manor house comes with 1.6ha (4ac) of land and outhouses, including barns and stables. In the Loire Valley, the house (which was previously on sale for €498,200) has a kitchen with diningroom attached, three reception rooms and two en-suite bedrooms on the ground floor. Upstairs are four bedrooms and a bathroom. It is 2km from Le Blanc town. Poitiers airport is just over 70km away.
Price €379,500
Agent frenchestateagents.com