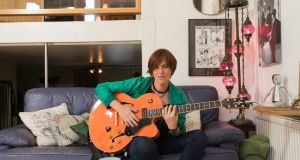 When you finally tire of Christmas movies and the endless re-runs, make a date with RTÉ’s Celebrity Home of the Year, a show that takes viewers into the homes of some of our favourite celebrities in a way a magazine shoot simply cannot.

RTÉ weather woman Jean Byrne’s house is very classically laid out with a formal living-cum-dining room warmed by antique furniture. She uses over-mantle mirrors to bounce light around the timber-floored room and has installed a roof light above the fireplace where, on a clear night, she can star gaze.

Only a Woman’s Heart composer, Eleanor McEvoy’s period redbrick in Dublin 8 really lights up the screen as she uses the entire house as a creative writing space

Artist Robert Ballagh’s elegantly artistic abode is a pair of interconnecting cottages in Dublin 7 that was designed by Boyd Cody Architects, while writer John Boyne’s book-filled building shows how you can use one of life’s great pleasures to stylishly decorate your home.

Cara Pharmacy boss Ramona Nicholas has a staircase and galleried landing that would give the fabled Tara in Gone With The Wind a run for its money. But it is Only a Woman’s Heart composer, Eleanor McEvoy’s period redbrick in Dublin 8 that really lights up the screen – in part because the house resonates with music – as she uses the entire house as a creative writing space.

When she’s co-writing with other musicians she likes to works downstairs in the social space, a pointed yellow brick area where the piano is located. Here a gallery wall is home to mirrors and photographs, most framed in red while a William Morris-esque patterned couch looks straight out of a Vincent van Gogh painting.

The kitchen is hived off this area, divided by a brick chimneybreast and here is where the musicians like to take a break, make coffee and allow ideas to percolate. Open display shelving for plates evokes the old-school Irish dresser and there is a gas-fire insert in the brick-fronted hearth. On a warm day the musicians will venture outside to the garden to play.

When she’s writing for herself she uses a different method, preferring to ascend to a room she calls "the roof". Set under the eaves, the Toblerone-shaped attic space is where she sits down either at the desk and puts ideas down in a more formal manner using a pencil and paper; her next album, out in summer 2019, was written here.

When occasionally the creative flow turns to a trickle she climbs in a hammock suspended from the beams and looks up at the sky through the roof lights to watch the birds in flight. If that doesn’t help she’ll take a 180-degree turn and try the swinging seat.

Celebrity Home of the Year runs on Wednesday, January 2nd on RTÉ One. You can catch Eleanor playing songs inspired by 19th-century Irish poet Thomas Moore on Saturday, January 26th at the Pepper Canister Church, Dublin 2, as part of Tradfest.