Jennifer O’Connell: Buying the family home needs a lot of stars to align

Ireland was not easy to return to and buy a home. Then my mother asked if we’d be interested in buying theirs 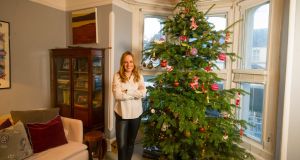 We had recently moved back home from abroad, and needed to find a place to live. My parents had been talking for a while about downsizing. For some reason, putting those two facts together and arriving at the obvious conclusion took a lot longer than it should have.

The house in which I grew up in Waterford has always been my touchstone for what a home should be. A Victorian townhouse with steps up to the front door, a bay window big enough for a giant Christmas tree, and enough space for me and my three brothers to each have our own room, it was my first and most enduring blueprint for the home I wanted to recreate for my own family.

I fell in love with our previous house in Dún Laoghaire on first sight, because its interior doors reminded me of the ones I grew up with. I painted my kitchen cupboards the same shade of duck egg blue that was in our family kitchen.

But back in the summer of 2016, it wasn’t yet even the germ of an idea. We had been living in California and had good lives and decent prospects – careers in the tech industry; excellent schools; the kind of deep, warm friendships that emigrants make fast, and cling hard to. “President Trump” was still just the silly punchline to a joke.

During long walks along the cliffs and afternoons on the beach, we started to find ourselves and each other again

We came home for a longish holiday in Waterford that June, to recharge, and reapply for our visas to the United States. We told ourselves, and everyone else, we were home for six weeks, two months at most. We both needed to rest after a relentlessly stressful couple of years. During long walks along the cliffs and afternoons on the beach, we started to find ourselves and each other again. As the days rolled into weeks, the US visa application forms sat untouched, and the enquiries from my San Jose-based employer about when I’d be coming back became less casual.

Making the decision to stay was the easy part. My Dublin-born husband and children have always loved Waterford, the walkable, friendly town between the mountains and sea, where you’re constantly bumping up against history and culture. The children flourished being near their grandparents and cousins. Making it a reality from an administrative point of view was trickier. This is not an easy country to return to – especially not if you want to buy a home.

We began by renting a beautiful, light-filled home in Dunmore East. The rent was one sixth of what we’d been paying in California, and our landlady was one of a special breed – kind, accommodating and reasonable – but it was our third temporary home on our third continent in four years.

Half our belongings were in a storage unit in an industrial estate miles away; the other half were in a container making its way across the Atlantic. Our pre-teen son and daughter were sharing a small room; the toddler’s room was packed so tight that we had to move her toy kitchen out of the way to open her wardrobe.

Once we were settled, the conversations started about whether, and where, we should buy a home. Our savings – bolstered by tech company share options and a small amount of equity salvaged from the sale of our boom-time home – wouldn’t have gone far if we’d been set on returning to Dublin, but in Waterford, it was enough.

We quickly realised how lucky we were. The one thing nobody tells you when you’re a returning emigrant is that you can forget about getting a mortgage for a while. If you have notions about self-employment, you can forget about it for longer than that. The same banks that, 10 years ago, were offering free cars and massages and babysitting for life, were holding no truck with such niceties now. It didn’t matter that we had paid off the mortgages on three previous homes in full, and had never made a late payment. “Computer says no,” the nice woman at the bank told us, apologetically.

House prices in Waterford still had a long way to go to their pre-crash levels, but there wasn’t a lot of choice. It became a standing joke among our friends that we all kept bumping into each other at viewings. We started looking at sites, and at houses that were too much of a compromise in other ways. And then my mother called and wondered whether we would have any interest in buying their home.

It seems like the obvious answer now, but surprisingly, I had never really thought about it. Even if I had, I wouldn’t have been the one to suggest it. What often gets forgotten in all the discussions about downsizing, and how the older generation should consider moving out and making space for their adult children, is that you’re not talking about two sets of strangers hammering out a deal. The relationships at stake are much more precious than any talk of “canny investments” and “good opportunities” can possibly capture. It isn’t just a financial transaction: it’s an intricate family negotiation, with a lot of separate needs and views to be taken into account.

Ultimately, though they had to bear most of the upheaval, I proved much more anxious than my parents did about moving out of the house they’d lived in for 30 years. I worried that they would feel strange or sad visiting us; that they wouldn’t find a house they loved as much; that my mum would miss her garden, which she’d spent years lovingly cultivating; that my dad would hate moving; that my siblings, whose home it once was too, would feel aggrieved. Would my parents now come to us for Christmas Day, as we’d always gone to them? Would my family home ever really feel like it was our family home?

The legal part was relatively easy by comparison. We both agreed to the price suggested by an independent valuation – a negotiation that took all of five minutes, and because we would buy at the full market value, there were no capital acquisitions tax (CAT) implications. A property transferred between family members for less than the current market value is treated as a gift. The amount of CAT you’ll have to pay depends on your relationship – the threshold for gifts from parents to children is €320,000.

For us, it worked like any other sale, only without the usual uncertainty: we got two separate sets of solicitors, set a closing date, and put aside enough for stamp duty and legal fees. A year ago to the day, as I write, we moved in.

Upsizing to your family home, while your parents downsize to one better suited to their lifestyle, can be wonderful, but it requires a lot of stars aligning. Because the older generation and returned emigrants can face similar struggles to get a mortgage, and because there’s no longer any kind of short-term lending facility, the finances, in particular, have to align.

The timing can be tricky too – my parents ended up having to rent a third home for a couple of months, while they renovated their new house. They’re fit and healthy, so that wasn’t a major problem, but it was a lot of disruption over a couple of months.

One year on, we know how lucky we are. It took painting one room for what had been my family home to feel like our family home. I have the duck egg blue kitchen I’ve always hankered after. My children sleep under the eaves, in the bedrooms where my brothers and I slept as children. My brothers were pleased that the family home was staying in the family. Most importantly, my parents found a house they love, in a place they have always wanted to live. And yes, they visit all the time – including on Christmas Day, when there will be huge Christmas tree in the bay window, just like always.