Why dietary advice is a critical part of cancer care 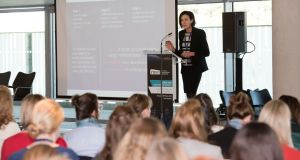 Director of the Irish Society for Clinical Nutrition and Metabolism Niamh Rice presents the results of the first Irish study of the nutritional needs of Irish cancer patients.

Cancer patients who lose weight before, during and after treatment have lower survival rates than those whose weight remains stable or have little weight-loss. Yet, three out of five cancer patients don’t see a dietician as part of their treatment.

“Nutrition is an unmet need in cancer care,” says Prof John Reynolds, head of Department of Clinical Surgery at Trinity College Dublin and president of the Irish Society for Clinical Nutrition and Metabolism (IrSPEN).

According to Prof Reynolds, cancer patients have the highest rate and severity of malnutrition of any patient group, yet even those with serious nutritional problems are frequently not receiving the right information, advice or support at the right time.

“Because many cancer patients struggle to maintain weight, early nutritional care, advice and support aimed at preventing weight-loss and preserving muscle is vital to cancer care,” says IrSPEN director and nutrition consultant, Niamh Rice. “This is a critical concern and we are calling on all healthcare professionals working with cancer patients to pay greater attention to nutritional problems such as loss of appetite. Even modest weight loss-increases the risk of treatment side-effects and poorer outcomes.”

Lecturer in nutritional sciences at University College Cork Dr Aoife Ryan says one in two cancer patients experience muscle-loss. “Muscle-loss among cancer patients is linked with poorer response to treatment and a poorer survival outlook. Failure to address nutritional deterioration puts the patient at risk of poor tolerance to chemotherapy, increased complications in surgery and increased need for hospital in-patient care,” says Dr Ryan. Patients who lose a lot of weight during treatment are also more susceptible to picking up infections.

Dr Ryan adds that while patients are weighed at every appointment, less than 40 per cent of them are asked about their diet. “Patients are sometimes referred to a dietician after surgery and not ever seen again or only seen if they have lost a lot of weight during treatment. What happens then is that they struggle on their own or turn to fad diets,” she says.

Many cancer patients don’t know what they should eat and can suffer from mal-absorption and mal-digestion during certain cancer treatments. Sometimes, when they need to eat more, their bodies are telling them not to eat.

One cancer patient says she couldn’t eat any food and even the smell of food made her sick. But, when she was given specific dietary advice from a dietician, she managed to eat again.

Another patient, who was seen by a dietician in the latter stages of her cancer treatment says: “She changed my diet, gave me different drinks to try . . . She recalculated the dose of enzymes and how I was using them. It made a huge difference . . . My appetite returned. I was able to walk. I had energy. I didn’t feel like I was dying anymore.” Aggressive nutritional therapy supervised by a specialist oncology dietician can turn around the disease process for some patients.

The lack of nutritional advice to cancer patients in Ireland stems from a medical education system with less emphasis on the importance of appropriate nutrition in patients’ treatment and recovery. The low number of dieticians in cancer care is another factor.

A seminar on nutrition in cancer care in Dublin earlier this year called for the prevention of cancer-related malnutrition to become a recognised goal of cancer care.

What cancer patients say about their nutritional needs

“I was scared to eat everything. I gave up meat and began to eat really unhealthily. I considered a vegan diet. I had no motivation due to fatigue from treatment. No nutritional advice was given to me apart from a HSE booklet.”

“There is a huge gap in the medical profession in terms of working with cancer patients on their diet and nutrition. There is no information at any clinics I’ve attended, no leaflets, no follow-on.”

“Patients should at the very least be given guidance as to where to access trustworthy and appropriate nutritional advice and warned of the pitfalls and risks of taking advice from quacks, celebrities, cancer fad diet books and online pseudoscience.”

“I had a mixture of problems – constipation, diarrhoea, loss of appetite . . . I was worried about weight-loss but wasn’t given any advice and didn’t see a dietician.”

“I would like to understand why I am losing weight even though I am eating.”

“I believe that dietary advice should be formalised into the process at an early stage. There is far too much bad info out there and the hospital needs to introduce good information early.”