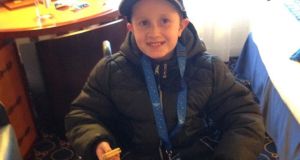 Nothing is more worrying than a sick child, particularly if they have a life-long condition.

However, when they are diagnosed with something very uncommon, it is surely even harder for both parent and their child.

According to the HSE, there are an estimated six to eight thousand rare diseases affecting up to 6 per cent of the EU population and about 300,000 Irish people at some point throughout their lives.

Conditions such as Cystic fibrosis and haemophilia are considered rare, but there are many other diseases which are less known.

Twelve-year-old Joshua McCarthy from Waterford is one of those who suffers from a rare disease which wasn’t diagnosed until he was he was 2½ years old. “Joshua was born with a rare brain malformation known as pachygyria, where the white matter of the brain is too thick,” explains his mother Ann. “When he was born in October, 2006, we noticed that he was sleeping a lot and not feeding very well. Then, when he failed to reach certain milestones, he was diagnosed with global developmental delay at the age of five months.

“He developed meningitis two months later and was then diagnosed with a benign scoliosis before being referred to Temple Street Children’s Hospital for treatment. But the doctors were still not happy with his development so they arranged for an MRI – after which he was diagnosed with pachygyria in January 2009.”

Joshua’s parents (Ann and Dermot) had not heard of the condition and were devastated with the diagnosis and the lack of information regarding how it would affect their young son throughout his lifetime. “The doctor told us not to expect much from Joshua [with regard to his development] as it affected his speech and mobility and he also couldn’t tell us what the future would be like for him as it [the condition] is life-limiting,” says Ann, who also has four other children – Jamie (19), Nicole (16), Abbie (7) and Alex (5).

“We left the hospital in total shock and I broke down when I realised that the future I thought my little boy had ahead of him was gone. The thought that he might never say mama or dada or take his first steps was heartbreaking. But we made a promise to do as much as we could to help him and started a long road of physiotherapy, occupational therapy and speech and language therapy to get him where he is today. He took his first steps at the age of seven but still requires a wheelchair as he is unable to walk for long periods of time.”

Because of the rarity of Joshua’s condition, it has been very difficult for the family to find support or meet with other families in similar situations. And the Waterford woman says this has taken its toll not just on her middle child, but also on his siblings.

“There is not much known about this condition in Ireland so we have no support network that we can turn to for help and advice,” says Ann. “As part of his condition, Joshua developed epilepsy and an incurable eye disease as well as a rare potassium-based gene known as KIF2A, which affects the muscles.

“His condition has had a huge impact on the family but his two older siblings have always been fantastic with him and never complained about missing out on holidays or days out as they just wanted to be there for their brother when each day brought new challenges for him.

“His daily life can vary as he doesn’t sleep very well and wakes up screaming and banging his head off the walls and floors. He is unable to dress himself or use the toilet so is still in nappies and on a lot of medication for his various conditions. All of this puts a big strain on the family and it is very hard to bring him out anywhere so his siblings really miss out on us all doing regular things together.”

However, the family did have a wonderful experience together when they went to Disneyland Paris – a place they knew Joshua would love as he is transfixed by the characters on TV. “Joshua can’t read or write but we knew he would love to meet Mickey Mouse as he loved watching the Mickey Mouse Clubhouse on the Disney Channel,” says Ann. “One day, his sister Nicole came across the Make a Wish Foundation on social media and suggested putting him forward for it. So his dad made enquiries and we were all thrilled when his wish was granted.

“The experience for the whole family was pure magic beyond words and it gave us the opportunity to make special memories with Joshua. To see the excitement [on his face] was breathtaking and giving him the chance to see something beyond his illness for a few days made such a huge difference to him. He got to be a normal little boy, to meet his hero and have lunch with the characters. It was a truly magical experience and we will be forever grateful to Make A Wish for giving us the opportunity to make happy memories and, most importantly, to make our little boy very happy.”

Living with a rare condition is very difficult, but the mother of five says something as simple as a family holiday can make all the difference. “Having a wish granted creates magical memories both for the child and all the family,” she says. “It gives the wish child respite from the illness and allows them to be a child again and it is something positive and exciting for everyone to look forward to.

“I would ask the public to support Make A Wish wherever they can as the charity grants wishes all over Ireland, wherever the need is – so it should be seen as a local charity for that reason. So if anyone is organising an event, however big or small, I would ask them to please consider this.”

– Pachygyria is a developmental condition due to abnormal migration of nerve cells (neurons) in the developing brain and nervous system.
– Pachygyria may occur alone (isolated) or as part of various underlying syndromes.
– Signs and symptoms vary and can depend on the extent of the abnormality. They often include poor muscle tone and motor function; seizures; developmental delays; intellectual disability; failure to grow and thrive; difficulties with feeding or swallowing; swelling in the extremities; and small head size (microcephaly).
– Pachygyria, also called “incomplete lissencephaly”, may be caused by various non-genetic (environmental) and genetic factors which play a role in impairing the development of the outer region of the brain.
– Environmental factors may include intrauterine infection during pregnancy (such as a virus), and insufficient flow of oxygenated blood to the brain during fetal development.
– For more information and advice on rare diseases, visit rdi.ie.

‘Oh my God, how do you stand there and know that the whole nation is looking at you?’
7

What will happen to all those new hotels Dublin was to get?
10