Meet the Ironman with too much iron 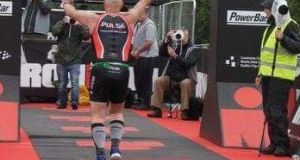 “I’m too young to feel this old, that’s what I said to myself, it was something different, and I’d no energy.”

Ken Byrne had always been an active man: he played sports all his life – soccer as a child, GAA in schools and had kept active into his working years. It was around the age of 35 he noticed things started to feel different.

“It’s about 12 years ago now that I started noticing small things, like getting out of bed in the morning time – really sore and slow, aches and pains. I just put it all down to wear and tear from various football injuries – as I got older I just put it down to getting older.”

Sporting activities had ceased and Byrne put the excessive tiredness down to the day-to-day schedule of work and family life, until one morning he woke up and realised his condition had moved past the ailments of a modern-day lifestyle.

“I couldn’t form a fist with my hands – they were really sore, really sore to touch the joints on my hand and I couldn’t close it, that was the start of me seeking treatment and, more so, what was wrong with me.”

After a few visit to his GP and a referral to a rheumatologist, he was finally diagnosed with rheumatoid arthritis. “When he told me it was a bit of a relief in one sense because then I could label it. It was a big kind of a shock, I felt I was young, just going on 36 when this happened. All I knew about arthritis was it was an old person’s disease, which is so untrue and I obviously know that now.”

Four years into treatment and battling symptoms of chromic fatigue, a blood test showed Byrne had a high level of iron in his blood. He was diagnosed with hemochromatosis. “It’s excess iron, you can’t get rid of the iron in your blood and symptoms of hemochromatosis are chronic fatigue, joint pain and basically everything that goes with arthritic conditions as well. It turns out my levels were off the charts.”

He was taken off medication for his arthritis and proceeded to have a pint of blood removed every week, a successful treatment for hemochromatosis. After a year of treatment, he started to come into his own again.

“It was January five years ago now that I decided to get back into the pool and it was then the path I’m on now started. I started to feel better about myself. To be honest with you, me as a person started to come back, I started smiling again. A lot of people don’t talk about that element of the disease – you are constantly in pain, you’re constantly down, it’s a of depression as well. I found me being sporty, the gym and the pool, I felt a little bit at home and being able to do it cheered me up.”

Byrne started to look towards triathlons and gave himself the goal of completing the sprint race at the Dublin City Triathlon, his first venture into triathlon. “It was the most daunting thing I’d ever done, I have never been so intimidated and scared. I didn’t know if I could do it, I hate failure.”

Job done, he was hooked. He joined Pulse Triathlon Club, his “happy place”, training with them as much as his condition would allow and taking a gentler approach if his fatigue kicked in.

A pain in his calf and a sudden lack of fitness halted his training and things turned out to be far more sinister than he had first thought. “I got blood clots four years ago. I had a very bad DVT in my calf muscle and into my thigh and I had two into my lungs so I nearly wasn’t here.”

Because I was diagnosed with hemochromatosis, I am an Ironman in a sense because I’ve too much iron

In true fighting spirit, Byrne made another comeback and decided to set his sights on an even bigger goal to complete the 2017 half Ironman, the Ironman 70.3, in Dún Laoghaire, Co Dublin. “Because I was diagnosed with hemochromatosis, I am an Ironman in a sense because I’ve too much iron. I was bolder and I was in a good place. I thought why not, what do I have to lose, it gave me a huge goal to achieve.”

Completing the course in eight hours and 23 minutes, 7½ minutes under the cut-off time, Byrne earned every inch of his half Ironman status. Running was a real struggle for him. It gave him the encouragement to achieve more goals for the rest of the season. “What I wanted to do then, after the Ironman, was not finish last in races. I wanted to try to compete with normal people. I want to do that [half Ironman distance] in 6½ hours, I want to finish a sprint triathlon mid pack, that was my goal for last year.” He completed three sprints and ranked higher than the last page of finishers every time.

Next up came the decision to enter the Dublin City Marathon, a bucket list race. But it wouldn’t be Byrne if he were just to complete the race while battling his current condition; he went that one step further and managed to get himself on a hip replacement list.

“I entered it [the marathon]in November 2017 and in January 2018 I saw a consultant about my hip. I was diagnosed with avascular narcosis, which is a lack of blood flow into the hip itself – my hipbone was dying basically, the ball joint was dying. He put me on the hip replacement list in January 2018. My attitude was, I’m getting it replaced I’ll see how I get on, again my goal was to complete it – I completed it in 6½ hours.

“I survived until around 16 miles and I just ran out of energy. It wasn’t my hip or my ankle, they say you hit a wall, I wasn’t in agony, I wasn’t getting cramps, I just couldn’t lift my legs anymore. I walked for a couple for miles and then I started jogging and walking just to get me home. You hit UCD and you are now 5km away and you are a Parkrun from home and the adrenaline kicks in.

“My skeleton hurt by the end of it, I was so sick of it I was happy to cross the finish line just to stop running and pounding, parts of me that never hurt before were hurting. The day itself was just amazing and the people on the streets cheering you on, it was brilliant. Would I rush back to do one again? I don’t think so; I’ve done one now, I don’t think I need to.”

To Byrne’s relief, he had his hip operation in February and was instantly pain-free. His recovery has begun and he is back in the pool and setting his sights on his next goals.

Byrne is an Ironman in the literal sense of the word, but will he take on the challenge of completing a full Ironman distance?

I think we all know the answer to that.