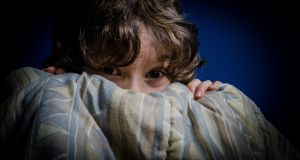 Sometimes there are specific triggers for nightmares such as seeing a scary image in a film or hearing about tragic news on the TV or dealing with a stressful event in school, but sometimes there are no definable triggers. Photograph: iStock

Question: My six-year-old has a lot of nightmares. These started months ago and we are still struggling to get a night’s sleep. We have always had trouble with him sleeping for one reason or another. I was hoping you may be able to offer some advice. He gives every appearance of being confident at school and with friends. He goes to bed about 7.30 every night and has no trouble falling asleep. However, he will usually have one or two nightmares per night, often four or five nights per week. He either calls out or comes in to our room very distressed and tells the dream – we bring him back to bed and usually stay for a bit. He’ll often come back soon after or may go back to sleep and wake with another bad dream.

His nightmares tend to be about being out somewhere and getting left behind. Last night was about being on holidays and his dad and brother were leaving some place without him. He has dreamed of falling in a hole and nobody being there to help him out. He often dreams of being somewhere with me and being able to see me in the distance, he calls for me and I don’t hear him and go away without him. He has dreamed about looking in a shop window at mannequins and they come to life and scare him. He also has had a dream about looking at a stone statue in a glass cabinet who comes to life. smashes the glass and grabs him by the ankles. That’s the general gist

He wakes early and never sleeps beyond 7am even if he’s stayed up a bit later. He has a night light, has a relaxing story before bed and doesn’t watch anything that isn’t age appropriate. I’m trying Epsom salt baths occasionally, have lavender spray, and he has a sleep sheep with soothing sounds when he wakes. We recently stopped TV watching during the week.

We are in desperate need of unbroken sleep and hope you may offer some suggestions or advice.

Answer: Nightmares are a common experience for young children. For most, nightmares are relatively occasional and for others like your son, they can become frequent and very disruptive to getting a good night’s sleep. Sometimes there are specific triggers for nightmares such as seeing a scary image in a film or hearing about tragic news on the TV or dealing with a stressful event in school, but sometimes there are no definable triggers. Often it is sensitive children who have active imaginations and a tendency to worry who are the most prone to having nightmares.

Remind him he has a powerful tool – notably his imagination – that he can use to change any dream.

In your own situation, the nightmares are in the context of your son already having a history of disrupted sleep. This means that when he wakes at night (for whatever reason) he is less able to fall back asleep himself and so seeks your comfort (which of course disrupts your sleep also). In addition, nightmares and night-time waking can become habitual, as seems to be the case for your son. The more frequently you have a specific nightmare, the more likely you are to have it again and the more you depend on your parent’s support to get you back to sleep, the more often you will seek this out.

Coach your son in getting back to sleep himself

When your son wakes during the night (whether with a nightmare or not), the long-term goal is to teach him the skills to get back to sleep himself without your support, so your own sleep is not disrupted. This might mean you don’t discuss the details of the dream in the night and instead simply reassure and comfort him – “ssh, we will discuss the dream in the morning, back into bed now, back to sleep”. You might give him strategies he can use such as a teddy he can cuddle, or show him a relaxing way he can snuggle into the bed. You might give him some support, but try to reduce this over time (eg comforting him in his own bed, rather than your own).

Use your son’s active imagination to his advantage and coach him in how to manage his dreams. In the morning, ask him to describe in detail the dreams he has. Doing this in the cold light of day will help him feel better, put the dream into context and take some of the scary emotion out. With support, lots of children can learn the skill of ‘lucid dreaming’, whereby they become self-aware they are dreaming in the middle of a dream. Suggest to him that when the same nightmare happens again, he can remind himself “this is just a dream, all will be fine”.

Remind him he has a powerful tool – notably his imagination – that he can use to change any dream. For example, in the dream where he is in a hole, you could explore how he can use his “magic” imagination to “climb out” or to dream up an ally to help him. You can even reinforce his new ending to the dream by drawing it out on a new picture which he can hang near his bed.

Finally, during the day continue to protect your son from scary images that might trigger nightmares and continue to work towards a relaxing routine at bedtime that helps him relax and unwind before sleep. Consider using his imagination to create rituals to encourage a good night’s sleep such as building a ‘dream catcher’ with him that you can put on his window to filter out nightmares and/ or letting him have a special “superhero cape” to protect him in the night.

– Email health@irishtimes.com with "Ask the Expert" in the subject line.

– Dr John Sharry is founder of the Parents Plus Charity and an adjunct professor at the UCD School of Psychology. He has published 14 books including Positive Parenting: Bringing up responsible, well-behaved and happy children. See solutiontalk.ie.