Feeling above par: why golf is good for you

The game may not work up too much of a sweat but the physical, mental and social benefits of playing a round have been well-flagged 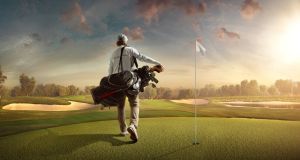 Golf might be “a good walk spoiled”, but evidence suggests the walk – spoiled or otherwise – is good for both your physical and mental well-being.

I turned 50 recently, and while nothing has changed except I’m now in a whole new age bracket when filling out surveys, it has coincided with an overall reassessment of my sporting activities.

I gave up a lifetime of organised football last year due to bad knees, and my stop-start attempts to take up running have hit a wall of general indifference. I like cycling, but mostly because it gets me from A to B without having to get a bus.

Which leaves golf as the only sport I practise.

The golf-is-not-a-sport-it’s-a-game refrain is a familiar one. Sports are about having a vaguely athletic physique and working up a sweat, two things easily avoided on the golf course. But the golf swing requires physical effort and the walk between shots adds up to an expenditure of energy, which is key in all forms of exercise.

The individual differences in energy expenditure can be large, depending on individual and golf-related factors. Studies quantifying golf by Metabolic Equivalent of Task (MET) value generally agree it offers moderate intensity aerobic activity, which is recommended for children and older adults.

Dr Kevin Flanagan now fits the second category. A lifelong golfer and former Ireland team captain, the Strokestown-based medic considers golf a way of life. His mother Alice (76), still plays twice a week. His two sons, Seán and Tom, are both high-level competitors – Seán has also played for his country while 16-year-old Tom is a promising player rising up through the amateur ranks. Kevin’s wife and fellow-GP Siobhan is also a regular player. “You should be getting your heart rate up a little bit,” Flanagan advises. “You don’t need to be breathless. You should be able to talk while you walk.”

Flanagan’s days as a high-level competitor are now behind him, but he appreciates playing for other reasons. “Regular exercise – they say it’s the single biggest factor in terms of longevity in life. They say people who live longer, exercise more. I’m not talking about people doing triathlons but people taking 30 minutes of exercise five times a week.”

A 2009 Swedish study compared 300,818 golfers with non-golfers and found the golfers had a 40 per cent lower mortality rate.

The statistics bear this out. According to a scoping review published in 2016 by the British Journal of Sports Medicine of 301 separate studies undertaken throughout the globe, golfers walking 18 holes take an average of between 11,245 and 16,667 steps, or between 8.5 and 12.7km, well in excess of the 10,000 steps commonly assumed to be the daily target to maintain a basic level of fitness. Even golfers who ride a golf cart are getting some exercise in, to the tune of 6,280 steps a round. Even though you’re driving the course in a buggy, you’re still walking around 4.7km a round.

Which may not seem like much, but walking is key to avoiding physical inactivity, which kills between three and five million people a year. The 2010 Global Burden of Disease study highlights that physical inactivity is one of the top five causes of death in North America, western Europe and Australasia – three regions where golf is played.

A 2009 Swedish study compared 300,818 golfers with non-golfers and found the golfers had a 40 per cent lower mortality rate, which also resulted in a five-year increase in life expectancy, regardless of gender, age or socioeconomic status.

“One round of golf can satisfy the requirements for weekly exercise,” says Flanagan. “Better still, nine holes twice per week.” Another study, The Weekend Warrior (2004) concurs: better to play fewer holes more regularly than more holes all at once.

Other advantages of playing might not seem as obvious.

“I benefit socially from golf as well in terms of meeting all my best friends,” says Flanagan. “We all play golf. We all socialise off the course as well.” He isn’t alone in this.

Quantitative and qualitative studies have described the benefits related to self- and group-identity as well as the establishment of social connections, all of which are facilitated by golf. Not only does golf facilitate opportunities for intergenerational interaction, but specific studies have shown that playing has helped rebuilt social connections and confidence during and after illness.

One US study revealed the levels of self-efficacy, self-worth and physical activity of 814 participants with a disability all improved after they began playing regular golf, while the initial analysis of ‘The First Tee’ – a US sport-based development programme – showed that participants and parents noted improved confidence, interpersonal skills and emotional control – even if the game’s noted difficulty can often challenge the last of these!

For Kevin Flanagan, who completed his final year of medical training in Scotland, golf ensured a seamless transition. “Being able to play golf was great. I fitted in straight away,” he recalls. “Golf is a big thing in Scotland. All social activities seemed to revolve around golf.”

I have experienced exactly the same thing. A couple of years ago, I moved to Manchester, a place where I knew no one except my partner and her family. But since joining Reddish Vale Golf Club in south Manchester, I’ve managed to establish a social circle that keeps me from feeling isolated and lonely, and missing my own group of friends at home in Dublin. Plus, I’m playing regularly with players of all ages and social backgrounds – people I wouldn’t necessarily have been able to make friends with otherwise.

Finally, a round of golf affords all players the chance to shift focus from the anxieties and worries of everyday life. When I played football, I was able to concentrate on the game for 90 minutes to the exclusion of all else. Golf is not as intense or as hectic, but over the years I’ve learnt to leave my worries in the locker room before going out to play, and it’s clear I’m not alone.

“When I play golf, I get to leave the mobile phone in the car,” says Flanagan. “It gives you mind space. I find it fantastic from that point of view.”

Now if only I could figure out a way to break 80.