Platform: Embrace what comes your way, because, clearly, it was meant to be 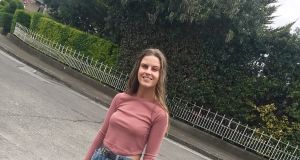 Bobbie Hickey: “I remember waking up one morning, lying in bed and realising I have never been this happy before.”

Hello! My name is Bobbie Hickey. I am 19 years old, 100 per cent Irish and about 95 per cent blind (the doctors say I have a whopping 5 per cent sight).

As it is the end of May, college is done and schools are beginning to wrap up the end of another academic year, I thought today we would get out of the kitchen and step out into real life.

This time last year, I was among the thousands of students preparing to sit the Leaving Cert exams. I began using all of my free time for study – getting essays written before school even started most days and not closing the books till late most nights. Copious amounts of coffee were drunk, hundreds of biros were used up and I went through a forest worth of paper.

I can remember feeling numb all the time, like my personality had been sucked away and I had been programmed to study 24/7. I sat the exams, feeling alright about most of them, but honestly at that stage all I wanted was for it to be over. On the day, I was finally finished, I was so tired that the feeling of relief only hit me a few days later, when I realised I could get rid of my books and that all that could be done now was to wait.

The summer flew by – I spent my days horse-riding and seeing friends – with not a care in the world. I was confident I had done all that I could and that the universe would realise this and grant me my first-choice wish.

The universe, however, or rather the CAO, did not realise this.

On the day the Leaving Cert results were issued, I arrived at my school ready to discover my fate with my parents – secretly cocky it would go my way. I was mistaken. I had to re-read the results and add the points up a number of times before it finally hit me I did not get the course I wanted. My heart sank as everyone around me tried to convince me that this was okay and that everything happens for a reason – “oh really, what is the reason for this happening? Why has my hard work not paid off?”

For the following week, I was miserable. The harsh reality that I would not be moving into campus accommodation and study what I wanted to was finally starting to settle in. I was told I needed to do a QQI (Quality and Qualifications Ireland) level 5 course in order to re-apply in a year’s time.

At first, the idea of this made me sick.

This was not meant to happen to me – it wasn’t part of my plan. Little did I know, I was about to have one of the best years of my life. The course began in mid-September and by early October, friendships had formed and people were getting into the swing of things. I was getting used to this unexpected chapter of my life with the new experiences and people it was bringing me. I remember waking up one morning, lying in bed and realising I have never been this happy before. I was forming friendships that would last a life-time and gaining skills that would stay with me throughout my career, all while having the best craic ever.

I do not think this happened to me because of my sight, but maybe it did – there is no way we will ever know that.

What we do know, is that it could happen to anyone, and not just in terms of exams. It could happen in any aspect of life. All it is an unexpected turn. In the last year I have learned that everything does happen for a reason, and that life has its own way of working things out.

Just embrace what comes your way, because, clearly, it was meant to be.

Platform Series: Bobbie Hickey
1) Making a sandwich when you're blind
2) Not getting the points I wanted
3) Benefits to being visually impaired
4) I’m not blind. I’m Bobbie Hickey
5) College with no friends, and no eyes
6) People freeze when I approach them
7) Why I mind needing help
8) The best teacher I have ever had
9) ‘This could happen to anyone’

Michael Caines: ‘You’re hanging upside down and you see a hand, lying there, and your arm’s gone’
Real news has value SUBSCRIBE