My mini-marathon: ‘I want to be around as long as possible’

When Pamela Treacy’s husband got Hodgkin’s lymphoma, they learned the value of fitness 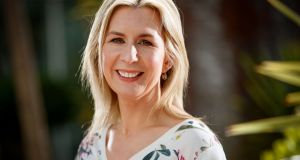 Pamela Treacy: “The people taking part in the marathon are running it for really positive reasons and they all have unique stories. I find it very special.”

Before her husband became ill, Pamela Treacy always felt their health was “bullet-proof”. An active couple in their 30s, Treacy was shocked when her husband was diagnosed with Hodgkin’s lymphoma, a cancer of the lymphatic system.

“It was an absolute bolt out of the blue – there were no symptoms. Luckily he was diagnosed early and treated within four months. Ever since that setback we haven’t looked back. Both of us really understand the importance of a healthy body and a healthy mind. He goes out cycling and I go for a run; we appreciate being able to do those things.”

Treacy first ran the VHI Women's Mini-marathon in 2014. She had struggled to lose weight after giving birth to her second baby in 2012 and turned to running to get fit.

“I had so little time to myself between work and two babies. Initially, running was for weight-loss but I found it addictive. You come in and you feel happy. When you start your head is full between balancing work and children. I found it gave me focus and allowed me to clear my mind.”

Treacy often goes running with her friend and the pair use the exercise time to gossip about work and laugh about family life. “It’s our little time to chat. But it’s also a great way for me to unwind when I go by myself. By the time I’m finished that 7km I’ve figured out the problem or issue in my head. I talk through the scenarios in my head of how to deal with a situation while I run.”

Treacy now makes the time to run four-five times a week. She lives in a rural area and drives to the town of Claregalway during the winter months to run a 5km route in a lit-up area. During the summer, she takes an 8km route along the country roads near her home.

She looks forward to taking part in this year’s mini-marathon, which will bring together more than 35,000 women from across Ireland to walk and run the 10km route.

“The people taking part in the marathon are running it for really positive reasons and they all have unique stories. I find it very special.”

She was recently introduced to artist Aoife Dooley, who was commissioned to create a piece of art reflecting Treacy’s reasons for running. The result was a large portrait of a woman running through the woods entitled ‘we run for me time’.

“She captured the happy thoughts you get from going running. While running is for me time, I’m also doing it to be around for my family and to be happy. My husband and I want to be around as long as possible to see our kids grow up and to grow old together.”