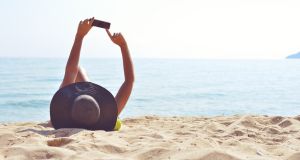 “Unfortunately with social media and mobile phones, we’re seeing an awful of people who get distracted”

The Chief Executive of Irish Water Safety has warned that parents are putting their children’s lives at risk by allow themselves to get distracted while at the beach.

John Leech was commenting on statistics from the organisation for the first two months of this summer which highlighted that 113 children were reunited with their parents by lifeguards.

“Unfortunately with social media and mobile phones, we’re seeing an awful of people who get distracted and unfortunately are not looking after their children very well and on a busy beach it’s very easy to lose sight of your child,” he told RTÉ’s Morning Ireland.

“Obviously everybody’s in their swim suits so it’s quite difficult to identify our child on a very busy beach. It’s something that we’re obviously concerned about because that’s how children drown and we lose a classroom of children every decade - that’s 30 children every decade because people don’t supervise their children.”

According to statistics from Irish Water Safety 164 lives were saved in June and July, that’s 20 a week. “We don’t have all the statistics in from all the local authorities, it could be double that if we didn’t have these fantastic life guards,” he added.

Life guard Fiona Quirke from Galway said that among the problems they face are non-swimmers jumping into deep water, out of their depth. Another issue is the large number of inflatable craft on beaches such as lilos.

“Small children are drifting out into deep water, we encourage parents to look after their children and always ask the lifeguard if it’s safe to go into the water.”

Mr Leech said that the main tips for everybody this bank holiday weekend are - swim in areas where there is a lifeguard, swim and stay within your depth. Use local knowledge, make sure a ring buoy available. Avoid inflatable items such a lilos, which he described as “floatable killers” and wear life jackets.

Coronavirus is new, but your immune system might still recognise it
3

Want to exercise but can’t face going for a run? Here’s what to do
6

An innovative educator: ‘Catch them doing something different, then celebrate it’
8

What sold for €540k in Donnybrook, Naas, Killiney and Castleknock
9

Meet the Bearman of Buncrana: ‘I knew about Joe Exotic for years’
Real news has value SUBSCRIBE