Flu season: 13 things you need to know about a nasty infection

When someone with flu coughs, their droplets can infect people up to 6ft away 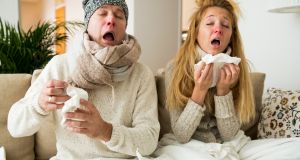 It is flu season – or perhaps it is still lurking just around the corner. Either way, influenza is a nasty and potentially dangerous infection, and its impact is often underestimated.

Here are 13 things you should know about flu.

When someone with flu coughs or sneezes, expelled droplets can infect people up to 6ft away.

The annual flu season runs from about October to March or April in Ireland, although most cases occur between December and February.

Flu leads to many GP visits and hospital stays each year, but, if you’re otherwise healthy, the virus will usually clear up on its own within a week.

The flu virus is extremely variable and changes over time. Each year there are different strains around, and a new vaccine has to be prepared to deal with them. Vaccination from previous years isn’t likely to protect people against current strains of flu.

Oxford University’s Vaccine Knowledge Project says there are three basic types of flu: A, B and C. Type A is the most dangerous and can cause serious disease and trigger worldwide pandemics. Type B can make you feel very ill, but has never led to a pandemic, and Type C causes mild disease.

The World Health Organisation has chosen its three strains of virus for this year’s shot. It has updated the influenza B component to take account of last year’s prominent strain. The two influenza A elements remain the same.

Typically, effectiveness of the flu vaccine is in the range of 40-60 per cent, and having a flu vaccination won’t stop all flu viruses and the level of protection may vary – so it’s not a 100 per cent guarantee that you’ll be flu-free. However, if you do get flu after vaccination, it’s likely to be milder and shorter-lived than it would otherwise have been.

Side-effects of the nasal vaccine may include a runny or blocked nose, headache, tiredness and loss of appetite. The injected vaccine may have side-effects including a sore arm at the site of the injection, a low-grade fever and aching muscles for a day or two after the vaccination. Serious side-effects with either the nasal spray or jab are extremely rare.

This year, the HSE has ordered an extra supply of the flu vaccine due to raised concerns of an epidemic during the winter months. The HSE spokeswoman told The Irish Times it has purchased up to 1.15 million doses of the vaccine, compared to 850,000 doses in 2017.

While the HSE recommends that everyone gets the flu vaccine, vulnerable groups are particularly encouraged to do so. These groups include people who are 65 years or older, those living with a long-term health condition, women who are pregnant, healthcare workers and carers, those living in a long-term residential care and those who regularly come into contact with pigs, poultry or waterfowl.

Last winter, 45 per cent of hospital staff in Ireland, and one third of those in nursing homes, got the flu vaccine. This winter, the target is 60 per cent. A report by the Royal College of Physicians of Ireland last month said that healthcare workers who need to decline the flu vaccination on medical grounds should wear a mask during the flu season, and/or be moved to a place where they pose a lower risk to others.

The European Commission estimates more deaths are caused by flu than by car accidents across the continent each year. Yet, around 100 million people recommended for the flu jab annually don’t take it up despite recommendations from the World Health Organisation.

Research from the Universities of Lincoln and Nottingham suggests the flu vaccine can reduce the risk of having a stroke by about a quarter.

Read: HPV and flu vaccines: who needs them? What are the risks if you don’t get them?