The dangerous, dirty world of Louis the Adventurer

The great white, swirling wonder of the toilet bowl is to my baby what the South Pole was to Ernest Shackleton 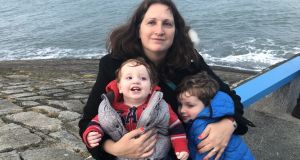 Genevieve with ‘Louis the Adventurer’ and Arthur.

It was the broken olive dish that did it. Shards of its shiny blue paint scattered on the floor. The crack through the yellow word Sorrento a reminder of blissful days on the Amalfi coast. An adult-only dish, a receptacle for one of few foods my kids don’t covet off my plate. Also known as “yukky grapes”. Much to my reluctance, some child-proof cupboard locks have been acquired.

You see, I’m living with Ernest Shackleton in 10-month-old baby form – an unrelenting, determined explorer with no fear of danger.

Louis the Adventurer has travelled many lands on his way to the ultimate baby Antarctic.

One of his first conquests was Plastic Province. Never in my carefree pre-Mammy days did I dream I would need so many reusable containers as to have their own cupboard. Daily, I sacrifice the sterility of my food storage solutions for the time it gives me to make meals as they are happily pulled down and banged together.

Nearby, the unexplored mystery Dishwasher District taunts him daily. I’ve learned how to pack and unpack in stealth mode. But one false clink of a plate or cup and I hear a scuttle scuttle of hands and feet on tiles as he races towards it. He arrives breathless as I click the door shut, evoking banshee howls of injustice.

Louis doesn’t have a baby walker because of well-aired concerns over their safety. But I regularly question my logic as he swings around the house. He moves standing on two legs from barely holding a cupboard handle to the fridge door to a chair to a table-top, testing each briefly for wobble-proofness before pulling himself along.

Every new surface is a chance to hunt for treasure as the percentage of places out of his reach diminishes. The little hands stretch up and fingers search blind into the countertop, flapping about until they find something. The best treasure is a) dangerous, b) dirty, c) definitely not a toy and d) belonging to his brother (such finds gets an extra giggle).

Sometimes, he discovers a bounty, grabbing one in each hand momentarily standing unaided on his wobbly legs. But like Wile E Coyote running off a cliff, it’s not until he looks down and realises he’s standing alone does he wail in fear and his chubby legs collapse as he plonks down on his nappy.

But much like the cartoon coyote, he’s never really hurt. For his devoted emergency rescue squad spend much of their waking time following him around and waiting to catch him.

This team is on high alert for two forbidden places which Louis the Adventurer would risk life and bottle for.

One is a grey fluffy mountain leading to the mysterious land of upstairs. So far, he’s made it up seven steps unaided before simply letting go and falling back (into Mammy’s arms). Perhaps I’ll succumb to stair gates in time but I fear this will give him an actual hurdle to climb.

The second forbidden place is to my baby what the South Pole was to Ernest Shackleton, the great white wonder of the swirling, whirling toilet bowl. It’s the ultimate treasure – dirty, dangerous, definitely not a toy and regularly used by his brother. If there’s even a small crack left in the bathroom door, he disappears as the rescue squad catch him just before contact (90 per cent of the time). For a baby who doesn’t talk yet, he can certainly communicate his contempt, arching his back and throwing his head behind, as he’s forced to abandon his mission.

Perhaps this spirit of adventure comes from being the second-born. He happily sits with his toys when we play together and build a tower of cups, roll a ball back and forth or do a baby jigsaw. But naturally, his brother regularly comes and “joins in” (takes over). So Louis eventually moves on to finding his own fun. As a second child, his parents are, to put it mildly, busier and he is left more to explore his world (not neglected I swear) than the first-born. Shackleton was a second child too.

So watch out world, for Louis the Adventurer.

‘My partner lasts only a few minutes in bed. Any advice?’
6