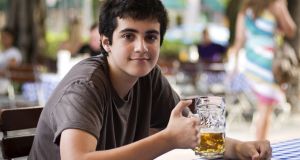 As a teenager, it is natural your son is interested in drinking, in the social life that goes with it and how to look and be cool when out with peers. Photograph: iStock

My 16-year-old son was recently invited to a family event of his best friend and I was shocked and upset when he arrived home and I could tell he had been drinking alcohol. The event was in a hired premises with a bar. I haven’t raised it with them yet and my son does not wish me to and though he told me what he had to drink, he has become coy at giving me the details of how exactly he got it. I am feeling very let down by the family, who we know well, but am not sure of the best way to deal with it with them, but I feel they have crossed a line and I am having strong feelings of anger about it.

I remember drinking at that age myself, but there was little money around and everyone went to the pub but could only afford a small amount. I want my son to be able to tell me if he is drinking and I think that he needs to be able to contact me if he needs lifts home or he gets into a situation late at night. Between his reluctance to tell me everything and now not trusting the families of my son’s friends, I am feeling worried and isolated with this issue.

I don’t want to be one of those parents who are clueless about their children’s drinking, but I do need to have some rules, especially around safety.

This is an issue that many parents will sympathise with as they are treading a delicate line between wanting their teenagers to trust them enough to tell them what is going on and at the same time trying to find a boundary that is reasonable and that the teenager can keep. It seems you have two issues: one is establishing real and trusting communication with your son and the other is the issue of tackling the issue with his friend’s family.

To tackle the second issue first, it seems that the event was not aimed at teenagers but was a family event held in a pub. The friend’s parents may well be aware of their own young person’s drinking but it may also be possible that other family members (cousins etc) could have been buying drink for the teenagers. This calls for a conversation and clarity but how you approach this is crucial – if you are angry and condemning, you may get a reaction that is defensive or even angry. This would make it very awkward for your son to meet this family in future.

However, if you approach this conversation with a sense of inquiry, you may find out both what actually happened and this family’s attitude to young people drinking. It is important that you take your son’s wishes into consideration but as your son is only 16, you have a right to ask that he not be offered any alcohol when out with them.

Most parents understand that there is a continuum of opinion amongst families on this topic and that other people may have different views to them and so they may be supportive of you. However, what you don’t want is that both this family and your son collude in keeping you in the dark about any future drinking. Therefore, if possible, lay the responsibility for your son’s drinking in his hands and just simply notify the other family that he knows he is not to drink alcohol – it is not up to them to police this but neither should they offer alcohol to him.

This leaves your relationship with your son and you have an opportunity to set up a life-long open and trusting connection with him. It is natural that he is interested in drinking, in the social life that goes with it and how to look and be cool when out with both peers and others. Be open to these discussions and take him seriously. It is hugely important that he understands your position and your fears for his welfare but he will only be able to hear this if he feels that you fully understand and appreciate his world.

As a teenager, he is unlikely to fully get why you are concerned – most teenagers see no danger – and so you might need to find other ways to motivate him to monitor and control his drinking. If he is into sport, he may be open to the connection between fitness and alcohol or he may like having a goal that will reward him, such as driving lessons if he does not drink until he is 18. However, the most important thing is that you and he have a truthful relationship and therefore you must not punish him for telling you the truth.

He is now a young man and, as such, he has the ability to empathise and understand your fears and worries. It is worth containing your fear while you build the type of future relationship you would like with him – this may require some patience and forbearance. When we are frightened and worried, we often respond with accusations and rules in an effort to make us feel safe.

This situation needs a long-term, steady and reasonable approach that sets your son up as the self-managing person you hope he will become.