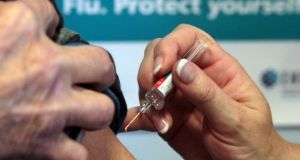 “Flu vaccine uptake in Ireland amongst healthcare workers now compares favourably with other countries in Europe where traditionally uptake has been low.” Photograph: David Cheskin/PA Wire

The Health Service Executive (HSE) has ordered an extra supply of the flu vaccine this year due to raised concerns of an epidemic during the winter months.

A HSE spokeswoman told The Irish Times it has purchased up to 1.15 million doses of the vaccine compared to 850,000 doses last year.

While the HSE recommends everyone gets the flu vaccine, vulnerable groups are particularly encouraged to do so.

These groups include people who are 65 years or older, those living with a long-term health condition, women who are pregnant, healthcare workers and carers, those living in a long-term residential care and those who regularly come into contact with pigs, poultry or waterfowl.

The flu vaccine has a 40 to 60 per cent protection rate, but GPs are concerned about the lack of effect it has had on certain groups.

The HSE urged all healthcare workers and people in at-risk groups to get the flu vaccine, as figures show seasonal flu vaccine uptake rates among staff working in the health services last year were at the highest ever levels.

“The increase in uptake in healthcare workers is very welcome but we need to make sure that this positive development continues and that every healthcare worker considers getting vaccinated this year,” said interim head of the HSE National Immunisation Office, Dr Sean Denyer.

“Flu vaccine uptake in Ireland amongst healthcare workers now compares favourably with other countries in Europe where traditionally uptake has been low.”

He said: “If you can’t get the flu, then you can’t spread the flu. Overall uptake rates for flu vaccine amongst healthcare workers working in the acute hospital sector reached 44.9 per cent last year, up from 34 per cent the previous season. More than 3/5 of our hospitals now exceed the 40 per cent national uptake target.”

“The impact was particularly severe for those aged 65 years and older, with 2,218 confirmed influenza hospitalised cases and 85 ICU admissions in this age group. 222 deaths were reported to HPSC, with an average age of 81 years,”he said.