Danger of a catastrophic influenza pandemic far from over

On the centenary of the Spanish flu epidemic, a worldwide authority on infectious diseases issues a timely warning 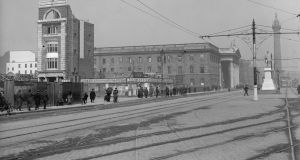 Sackville Street in Dublin during the rebuilding of 1918. Funeral corteges were a common sight in the city during the Spanish flu epidemic. Photograph: R. Humphrey/Topical Press Agency/Getty Images

“Yesterday, from early morning till well after midday, cortege after cortege reached Glasnevin Cemetery, sometimes as many as three corpse-laden hearses being seen proceeding up Sackville Street at the same time. Close on 40 orders for interment were issued at the Cemeteries’ Office yesterday, and, inclusive of the remains brought for burial on the previous day, which had been temporarily placed in the vaults overnight, there were close on one hundred bodies for sepulchre.”

This is how the The Irish Times of October 31st, 1918 described the effects of the Spanish flu epidemic – 100 years ago this month.

Globally the influenza virus killed an estimated 50 million people. And yet the disease was not considered especially lethal. As Ida Milne, in her recently published book Stacking Coffins notes: “International statisticians and historians often use a death rate of 2.5 per cent of those who actually caught the disease (case fatality rate) to estimate morbidity. Applying this rate to the official estimation of Irish influenza dead, 20,057 would give a morbidity of approximately 800,000, or about one fifth of the island’s population at the time.”

Whatever it may have lacked in lethality, the 1918 flu made up for in virulence. Could we see one fifth of the population struck down with influenza ever again?

Dr Michael Osterholm, director of the Centre for Infectious Disease Research and Policy at the University of Minnesota, thinks so. In a recent conversation piece in the Journal of the American Medical Association, he was asked if improvements in vaccine development and sanitation mean another pandemic on the scale of the 1918 flu is avoidable?

“I would say that we are much more vulnerable today to a catastrophic influenza pandemic than we were in 1918. That may seem counterintuitive, but today there are about 7.6 billion people on Earth, more than 3 times the population in 1918. When we talk about less crowded living conditions today, that is true for part of the world. But for the vast majority of the world it’s worse.”

“We now have influenza vaccines that we didn’t have in 1918, but their effectiveness is limited. In the 2009 influenza pandemic, which fortunately was mild, that vaccine was roughly 50 to 55 per cent effective. More importantly, less than one per cent of the world’s population had access to the vaccine in the first six to 12 months of the pandemic because of our inability to quickly make a largely egg-based product. In the future, vaccines still are going to have only a limited impact.”

With a universal flu vaccine that could be given every 10 years in the pipeline, surely Osterholm is being overly pessimistic?

“Unfortunately we’re a long way away even though there’s a lot of hype today that it’s just around the corner...We think there’s reasons to believe we can find a combination vaccine that would be much more effective. But I would say we’re at least five to eight years off...”

He thinks more money and effort is required– a universal flu vaccine “could do more for the world’s public health than we even did with the eradication of smallpox, and it would surely have a major impact economically in terms of taking off the table future pandemics”.

Meanwhile, its the annual influenza vaccine season. The World Health Organisation has chosen its three strains of virus for this year’s shot. It has updated the influenza B component to take account of last year’s prominent strain. The two influenza A elements remain the same.

A calculated gamble by WHO every year, the lead in time to manufacture means we will always be vulnerable, as happened last year, to the emergence of a different strain of the virus as the flu season progresses. But even if this happens, having the vaccine will lessen the severity of flu infection.

It’s available now from your GP or pharmacy.