For separated parents, now is the time to start talking about Christmas 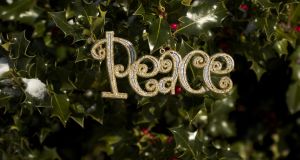 ‘Not all separated parents get to see their kids on Christmas Day.’ Photograph: iStock

It’s the time of year when we play a losing battle against the imminent arrival of Christmas – but if you’re a separated parent, you have to think about Christmas whether you like it or not.

Separated parents need to start working out as early as they can what arrangements will be made for their involvement with the children at Christmas. The doorstep on Christmas Eve is neither the place nor the time for this discussion.

I know it’s not always the case, but I’m going to assume in this article that the parent living away from the family home is a man.

Not all separated parents get to see their kids on Christmas Day. Instead of having a Battle Royal about this, it might be better for the children’s peace of mind to agree another day as close as possible to the day itself.

If you cannot or don’t wish to see the children in the family home can you see them in your own parents’ home? You should probably involve grandparents anyway because they are such a major part of a child’s life and they can help to create a real Christmas atmosphere for you and the children.

If the children are going to stay overnight with you, be sensitive to whether that is a night on which they might have an important (to them) party or other event to attend. Perhaps you can can be the taxi.

What about Christmas Day itself?

If you live nearby, it might be feasible for them to call to you for a while. Would it be feasible for you to be present for some part of the day in their own home? I acknowledge that this could be emotionally difficult in the early stages of the separation, especially if the mother has another partner in the home.

Even if you detest the new partner and even if you’re right to do so, this might be the time of year to bury the hatchet, metaphorically, for a few days. The children are probably going to run into that person over the Christmas and the notion that “my children will never be in the presence of that (fill in your own expletive)” is simply unrealistic.

Presents can be a source of angst for separated parents. It’s helpful to know what the other parent is buying the kids so you don’t end up buying the same thing. Moreover if the parent who’s living with the kids has already told them they’re not getting a new phone for Christmas, it’s probably best not to undermine her by showing up with an iPhone XS Max for each of them.

If the new partner’s children are also in the home, you might consider getting something for them too when buying for your own kids.

Now, some custodial parents are impossible and bloody-minded and will deny access to the living-apart parent, regardless of what’s been agreed previously – sometimes coming up with excuses at the last minute.

In that case it might be more important to the children that you grit your teeth and do what you can to maintain some sort of harmony over this period than that you fight it out immediately.

Remember also that, sooner than you think, the children will be of an age and temperament to make up their own minds about seeing you regardless of the other parent’s objections.

If sending a present and a card is the most you can do, then do that much at least.

For most parents who are separated, Christmas arrangements can be worked out fairly easily. Most of the mothers I have come across are keen that their children should have a good relationship with their father, even if the adults heartily detest each other.

Whatever your situation, now is the time to start talking about Christmas either directly or though a mutual friend whom both of you trust.