‘A penny candle in the darkness’

The desolation of a good friend and talented playwright dying by suicide prompted his buddies to ensure his legacy lived on. And so, ‘The Crilly Trilogy’ was born 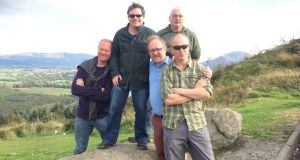 In April last year, I was working in London when I thought about calling in on my old buddy Joe Crilly. Joe and I knew each other for nearly 20 years. We met in the 1990s in London when I was a reporter with the Irish Post and he was the arts editor.

As often as time would allow, we met for pints and banter. Joe was marvellous company as he rolled cigarettes and spun yarns in that Armagh baritone of his, hardly leavened by 30 years living in London.

This time, though, I decided to forgo the pints and the banter. Pints meant hangovers and I wanted to keep a clear head. There were promises to keep and miles to go before I sleep.

There would always be a next time.

But there was not a next time.

A few weeks later, Joe left his apartment in London and took a flight to Barcelona. He left his phone behind him. His friends and family panicked and posted messages on his Facebook page urging him to look after himself.

Though he left home without what is effectively a tracking device, Spanish police managed to find him. He reassured them he was alright and just needed time to think about things and clear his head. The police let him go.

Joe took a train across the border into France and ended his life in a hotel room in Perpignan.

He suffered from periodic bouts of depression. He would state matter-of-factly that he was on medication and it was under control. No one of us suspected it would ever come to this.

When somebody dies by suicide, immediate thoughts are for his or her closest family members – in this case his son Redmond and his large loving family of brothers, sisters, nieces and nephews.

Was there something I should have done differently? Many of us who were friends of Joe asked themselves the same questions in the aftermath of his death. What if we had met in London in April? Joe and I always had intense conversations. Maybe, he might have unburdened himself of his troubles and felt better for it.

There was a group of us former Irish Post employees who would meet up once or twice a year to go walking and talking. I used to joke that the photographs we took resembled an ageing indie band getting together for one last tour.

The previous autumn we went walking in the glens of Antrim. Joe didn’t need to discern the colour of the paving stones to know the character of every village we passed through. Like many exiles, Joe was fascinated and appalled by the North he left behind.

Perhaps if we had met up as a group, Joe might have felt uplifted by our company, but we were all doing other things. Busyness is often a byword for not doing the right thing by friends and family.

Perhaps, nothing or nobody could have lifted Joe out of the fathomless pit of despair he found himself in when he took his own life. If those who die by suicide could see the pain they leave behind, would they conclude that life was worth living? Alternatively, would they conclude that living in this world was not worth the pain no matter who they hurt in taking their own lives?

Suicide prevention charities do a lot to talk people out of their despair, but, for many, life is a constant struggle against the darkness and the darkness sometimes wins.

I used to believe that as people got older, they learned to cope better, to be more comfortable in their own skins and to come to terms with the vicissitudes of life. Joe’s death at the age of 55 disabused me of that belief.

His remains were taken home and buried in the churchyard of Ballymacash near the shores of Lough Neagh where he grew up. It was at a sombre post-funeral gathering that I suggested we put together a collection of his plays.

This is the origins of The Crilly Trilogy.

His two plays produced each side of the millennium, Second-Hand Thunder and On McQuillan’s Hill, garnered such good reviews that he was profiled in the Guardian and inThe Irish Times. Prior to that Joe had been an actor. Acting left him disillusioned. He admitted frankly that he couldn’t deal with the inevitable rejections which are the lot of the actor. He had much more control too as a writer, not a performer.

At that time, I had naive pretensions of being a screenwriter. Joe sent me an early draft of the third play in the trilogy, Kitty & Damnation, which was eventually produced in 2009. Joe had a facility with language which is unique and because it is unique, it is extremely rare.

There is a baroque quality to much of the dialogue in his plays though they are always accessible and extremely funny. I read Kitty & Damnation with envy. “I’m only fooling myself,” I concluded of my own ambitions.

Joe left the North in 1982 as a teenager, but the North never left him. Second-Hand Thunder and On McQuillan’s Hill are contemporary to many of the issues happening at the time in the North. Second-Hand Thunder is loosely based around the terrible nonsense that went on at Drumcree every year and On McQuillan’s Hill on the large-scale prisoner releases which went on after the Good Friday agreement.

Joe had no time for sectarianism and regarded its perpetuators on both sides with equal distain.

I put The Crilly Trilogy together over the period of some months. Everything I asked for from others, I got. Hugh Bonneville, one of the most in-demand British actors, from Downton Abbey to Paddington, supplied a preface. He and Joe had been contemporaries from the National Youth Theatre in London. “I was blown away by the tumbling, lyrical flow of language and the relish of telling a tale,” Bonneville wrote. Stephen Wright, Joe’s first producer and now a successful TV producer in London, and the actor Ruairi Conaghan chipped in with introductions to his plays. Redmond Crilly wrote a beautiful tribute to his father. Dr Mark Phelan, a lecturer in drama at Queen’s University Belfast, contributed an opus of 6,000 words identifying Joe as a significant dramatist whose work deserves to be taken seriously.

I had little difficulty crowdfunding the book. Those who knew Joe’s work thought it was a good idea. Others contributed because they knew Joe as a great guy. In his latter years, he worked for the Peabody Trust, a housing association in London, as a befriender to those clients who struggled to cope in such a vast metropolis. The trust held a launch party in London during the summer and unveiled a plaque to Joe outside their headquarters.

Now it is the turn of his friends, family and admirers in Belfast. There is a sense of desolation when somebody dies by suicide, but at least Joe left a tangible legacy behind. We hope The Crilly Trilogy will reignite interest in Joe’s work and see his plays restaged.

It is a penny candle in the darkness.

The Crilly Trilogy will be launched in Belfast’s Lyric Theatre on Friday, November 9th at 5pm. It is available to buy online at orpenpress.com.