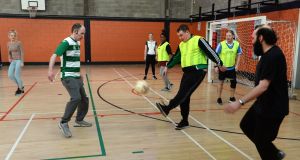 It is a sad fact that people with long-term mental illness in Ireland die 15-20 years earlier than the national average. What often happens is that in the midst of dealing with symptoms of schizophrenia or other mental illnesses, the physical health of these individuals is neglected. For example, studies have found that people with severe mental illnesses have higher rates of stroke, cardiovascular disease and diabetes and sometimes these conditions are not closely monitored.

However, in the last few years, an attempt is being made to close that gap with initiatives to incorporate physical exercise into mental health programmes throughout the country. The rationale – as if one was needed – is that improved physical health will not only reduce risk of chronic diseases but also bring mental health benefits. Initiatives include walking for wellbeing, learn-to-run efforts and soccer skills training run by the Football Association of Ireland (FAI). Local sports partnerships are often involved in setting up such initiatives, but participants need to fill out the Physical Activity Readiness Questionnaire and discuss it with their doctor before signing up for classes.

The weekly soccer training (not currently being held for obvious reasons) for mental-health service users at the Kilmore West Recreation Centre in Dublin is a good place to see this new Let’s Get Active HSE mental health services strategy in practice.

“The lads who come along every Thursday relate to playing soccer as children and it brings back that feel-good factor,” explains Manton, who is studying to become a personal trainer and has already completed a postgraduate course in clinical exercise.

When the soccer sessions started six years ago, a coach from the FAI came along to do skills training with those who attended. But, soon the group decided that they’d prefer to simply play soccer for an hour rather than have skills training for half of the time there. “It’s very simple really. Everyone finds their level and people let those who aren’t as good get the ball – which in itself builds awareness of others, a transferable life skill,” says Manton.

When we went along to see the players, there was a strong sense of friendship and fun – with Manton and a couple of trainee occupational therapists joining in in the game. “The biggest change I see in those who come along is how their confidence is improved, which is a massive thing for their mental health. Community-based activities like this also allow people to socialise with their peers, which gives them confidence to do other things like courses at the National Learning Network,” explains Manton.

Ivan Carroll, who lives in a hostel in Raheny, helped start the weekly soccer sessions. “It’s something to look forward to each week. I work in an office so coming here every Thursday afternoon makes work a lot easier for me. It’s relaxing and gives me more confidence and a sense of belonging,” explains Carroll.

James Teelan travels from Lusk in Co Dublin to Artane for the weekly sessions. “I can’t wait to get in to play football every week and then I can’t wait to get home again,” he says. He goes to a peer-led clubhouse for people with mental health issues two other days a week and goes to literacy classes on Fridays. Anthony Conway says that the soccer sessions “get him out of the house”. “Otherwise, I’d be sitting around doing nothing,” says Conway, who lives with his mother, father and sister.

The soccer sessions were cancelled for a few weeks in January as one of the participants died by suicide. “All the lads came to the funeral. It was hard for them losing someone who they had known for a long time and not being able to do anything about it. Some of the lads have difficulty expressing their emotions but we offered them support around this,” says Manton.

Occupational therapists Claire Considine, Maeve Coyle and Jack Doody are on the sidelines as back-up support to those at the soccer training. “Many of these men are living in hostels or at home and their access to group physical activity is limited,” they explain. In 2019, the Artane group joined five others teams from community mental health services to play in a blitz, and they also played against a team from Dublin City Council.

It’s a simple initiative that takes a bit of organisation and motivation on behalf of staff and participants who come along each week. Keeping fit and in good physical form can only improve people’s resilience when coping with setbacks to their mental health.

Working from home could save you 8 weeks and €3k a year, and halve your transport footprint
6

How clean is your bed?
8

Kathleen Watkins: ‘Occasionally I find myself talking to Gay in my head’
10

‘When you do put your clothes back on, you’re changed’: The nudists of Killiney
Real news has value SUBSCRIBE