Most women live into their 80s. These women die in their 30s. Why? 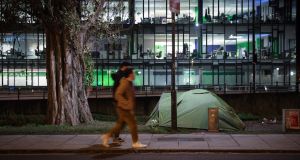 A homeless person’s tent on the bank of the Grand Canal at Charlemont. Women now account for 42 per cent of the adult homeless population, and this rises to 44 per cent in the Dublin area. Photograph: Crispin Rodwell

The average life expectancy of a woman in Ireland today is 84, but the average age of death for a single homeless woman in Dublin is just 38.

Social exclusion is extremely bad for your health and it is particularly detrimental if you are a woman.

Next Sunday is International Women’s Day, a day when we celebrate the social, economic, cultural and political achievements of women. The day also marks a call for action for accelerating women’s equality. The theme this year is #EachforEqual and nowhere are women today more unequal than those who silently exist at the very margins of society.

Women who are socially excluded include prisoners, those living in direct provision, Traveller women and the homeless.

Perhaps no one knows more about the shattering impacts of social exclusion on women’s health than Dr Clíona Ní Cheallaigh, Ireland’s first consultant in inclusion health, who cares for homeless patients at St James’s Hospital in Dublin. According to Dr Ní Cheallaigh, socially excluded women are particularly vulnerable to sexual assault and domestic violence.

She said women who are socially excluded tended to have had very traumatic childhoods, which included experiences of physical and or sexual abuse as children and or having witnessed domestic abuse at home.

“To be honest as a woman it is incredibly distressing to hear what it is like to live as a woman who is socially excluded. The stories of rape are very frequent. I have heard of women being sent back to the same hostel where they were raped where the perpetrator still is after having been raped,” she said. “It’s incredibly distressing. I can’t imagine what it would be like to live that life.”

A 2018 paper from the National Women’s Council of Ireland (NWCI), entitled The Impact of Homelessness on Women’s Health, speaks of “the feminsation of homelessness in Ireland during the current housing crisis”.

According to the NWCI, “women now account for 42 per cent of the adult homeless population, and this rises to 44 per cent in the Dublin area. The increase in female homelessness has been attributed to the rising numbers in family homelessness, the majority of which are lone parent, female-headed households.”

The NWCI paper states that in February 2018, there were 2,570 homeless women in Ireland, making up 42 per cent of the 6,052 homeless adult population and that women make up a much higher percentage of the homeless population in Ireland compared to other European countries, where the figures are much lower, at typically 20-33 per cent.

The NWCI noted that these figures did not include the many women and children living in domestic violence refuges or direct provision centres nor do they include the invisible homeless – women staying with family or friends.

Two years later, it is hard to see that these numbers have changed much, although, given the enduring nature of Ireland’s housing crisis, they may well have increased.

Another major trauma that many homeless women endure is being separated from their children. “A lot of homeless women have lost custody of their children and I think the trauma of having your child taken away from you is an incredibly traumatic experience for a woman in particular to have. And again for me, that is trauma at a point from which it is very difficult to recover psychologically,” Dr Ní Cheallaigh said.

Dr Ní Cheallaigh said there was a lack of services to help vulnerable mothers who needed a lot of specialised parenting support. “Parenting is really challenging and you can imagine if you are stressed out because you don’t have money, you don’t have your own kitchen, you yourself haven’t necessarily had very positive experiences of being parented, you have mental health difficulties, addiction difficulties, all of that as well as the stresses of parenting,” Dr Ní Cheallaigh explained.

She said there was a need for more supportive living arrangements for women who are at risk of losing their children where they would have access to 24-hour mental health or addiction support to get them over an acutely difficult period and enable them to keep their children.

“Frequently because of a lack of services we are setting women and parents up to fail. We know that people are at risk of losing their children but we don’t have the right sort of supports to help them keep their children and the outcomes on children in State care are really poor.

“A lot of the women we see who are homeless have experiences of growing up in State care and then frequently of losing their children to State care again.”

According to Dr Ní Cheallaigh, a lot of homeless women use addiction as a coping mechanism to survive domestic violence. However, women’s refuges and shelters will not allow women with addiction to access their services which means that women are caught in a vicious cycle of abuse and addiction with no way out.

There are just two women-only homeless hostels in Dublin, which are run by Novas, a voluntary organisation working with single adults families and children who are homeless or at risk of becoming homeless. Dr Ní Cheallaigh believes there is a need for more women-only services like those provided by Novas, as well as extra funding to establish domestic violence services for homeless women who are struggling with addiction.

In the longer term she said more housing was needed as a lack of a home was always going to make vulnerable people much more vulnerable.

Dr Ní Cheallaigh said the women she cares for in St James’s are in their 30s and 40s and it was rare for her patients to survive into their late 40s. “We have a lot of patients, women that have died in their 30s and 40s which is heartbreaking and also there are consequences for their children if they have children,” she said.

Homeless women in Ireland are dying from chronic diseases like asthma, COPD, HIV, epilepsy, drug overdoses and infections relating from drug use.

Dr Ní Cheallaigh is one of a number of experts who is due to speak at the Annual Spring Meeting of the Institute of Obstetricians and Gynaecologists this Friday at the Royal College of Physicians of Ireland (RCPI). To mark International Women’s Day, this year’s conference will open with a special session on women’s health in marginalised communities. Other speakers will include Ellie Kisyombe, an asylum seeker from Malawi who ran as a local election candidate in 2019, who will speak on living in direct provision and the challenges women face; and Dr Sindy Joyce, an Irish Traveller, human rights activist and the first Irish Traveller to obtain a doctorate from an Irish university, who will speak on Traveller women – ethnicity, discrimination and positivity.

Dr Ní Cheallaigh said she was incredibly encouraged to see the Institute of Obstetrics and Gynaecologists at the RCPI take a stance on equality by focusing on women who are socially excluded.

Michael Harding: Though I cheered for Biden, I was more like Trump than I could admit
5

Róisín Ingle: Deck the feckin’ halls. That is an order
8