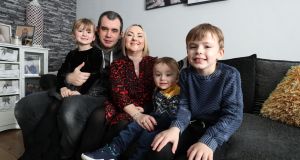 “You are always on high alert,” mum-of-three Lisa Murray says, describing her role as carer to her eldest son, Jack, who has autism and attention deficit hyperactivity disorder (ADHD).

“He was quite aggressive even at the age of two and he was non-verbal,” his mum explains. “At the time, the HSE had no psychologist who could diagnose him.” She was on maternity leave.

“We as a family were in a very bad place at the time, because we knew there was something wrong, but we didn’t know what. We ended up getting him privately diagnosed just so we could get him the help and support that he needed sooner rather than later.”

Now in primary school, Jack follows a very specific and rigid routine including eating the same foods and maintaining the same timings. “Any change in routine is difficult for him to manage – you’ll get the outbursts and the meltdowns and he gets extremely distressed,” Lisa says.

The other children in his class “know he’s different but it doesn’t affect how they treat him. He is very included where he is, but he wouldn’t have a lot of friends. He doesn’t know how to make friends or how to keep friends.”

However, there is one aspect of Jack’s schooling that is proving extremely problematic for them both. “He’s on a reduced day at the minute. He’s only in until 12,” Lisa says, attributing the shortened day to the reduction in Jack’s access to special needs assistant support. “It’s another fight we have on our hands. Even the three hours he is there have to include sensory breaks and movement breaks. He’s missing out on the curriculum.”

Lisa finds it difficult to get a break from her role as carer as Jack is very attached to his mother and likes her to do everything for him. “I go to all the appointments. I do everything with him. He’s so reluctant to let other people in,” she says. “Alan [Lisa’s husband] finds it incredibly difficult and says he doesn’t know how I do it.”

She credits both sets of parents with helping the couple spend time together. “If I hadn’t got them I don’t know where our relationship would be, because it’s virtually impossible to get any time.”

Lisa also worries hugely about the impact of the relentless demands on her time on her daughter, Ali. “She nearly gets left behind and it’s not because you favour one child over another, it’s because of everything that’s involved in Jack’s care needs from morning to evening. I worry about how it affects her emotionally.

“She’s only five and when Jack is going through a rough time, she takes the brunt of his behaviour. And she will still defend him till the end. She will not have anyone say anything about her brother. She’ll get herself into all states worrying about Jack.”

Isolation is a huge issue for Lisa. Friendships with other parents can be a challenge because “people don’t understand”.

“When you have a child, your instinct is to protect your child and if another child is hitting your child despite a diagnosis, they don’t want to know, really. We can’t do other things that people do. If I was to go out and meet a friend for coffee, Jack can’t sit, so unless my parents were around or Alan had the day off work it’s not possible. You get left behind – you don’t do the coffees or the playdates.”

And then there are the comments and judgments from others – the “tutting about Jack, like he’s a bold child. It’s mostly the older generation who don’t understand. I’ve had Jack run off screaming, saying ‘I’m not bold’ because they’ve made a comment.

“Like any parent, you have good days and bad days. I wouldn’t necessarily say you cope with it. For me it’s just about getting through the day.”

Read: Caring for son and mother