‘We were going to pay off the mortgage, enjoy life. Then my wife had a catastrophic stroke’

Life as a carer: John Bergin cares for his wife, who had a catastrophic stroke which affected 50% of her brain 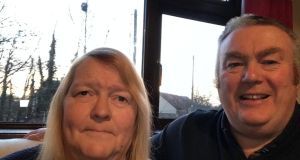 John Bergin with his wife Kay

“We had a different plan in life. We were going to get the mortgage paid off and the kids reared while we were still able to enjoy life. Do whatever we wanted to – a bit of travelling and stuff like that. That was our long-term goal, but that was knocked out of the park by the stroke,” John Bergin explains.

John is carer for his wife Kay who, 6½ years ago, had a catastrophic stroke which affected 50 per cent of her brain. Kay was left blind, diabetic, epileptic, with cognitive impairments, speech difficulties and some power deficit on her right hand side.

“She is able to mobilise her wheelchair,” John explains. “She can get around the house herself but she has a very high risk of falls, so she needs someone around her all the time.”

Kay was just 51 when the stroke occurred and the couple’s youngest child Ciara was preparing for her Leaving Cert. “In that sense we were lucky, I suppose, in that I wasn’t trying to look after small kids as well as herself. That was one blessing in disguise really,” John says. Kay spent night months in hospital where “she had to learn to basically do everything again”.

“I made the decision that I was going to look after her. I was a paramedic working full time with the national ambulance service. I took two years carer’s leave from that and was working one day a week while on carer’s leave. I found that worked very well for me.

“I’ve continued to do that. Basically my day off is that I go to work and sort out somebody else’s problems,” he laughs. “That’s my outlet. It gives me something for myself. I get to meet up with the lads and do the things that you need to do when you’re out working – have something for myself and a bit of camaraderie.”

For this to be possible, John’s eldest daughter, who is a garda, works around her own shift work so that she can take care of her mother.

It’s the only outlet John can afford himself as he explains “somebody needs to be here all the time with Kay, so your options are very limited to what you can do”.

Kay receives 10 hours of carers help per week, during which John carries out the practicalities and chores that need to be done. His children, he says, are “very good” to him. “They help out as much as they can and I’m very proud of them for the way they look after their mam”, but he’s aware that they have their own lives and so “doesn’t like putting too much on them”.

Coping with the change in their relationship is tough, John says. “You can be very isolated. In most marriages, if something comes up, you’ll sit down and talk about it and you’ll come to the decision between the two of you how you’re going to proceed. That’s kind of gone now. It is tough, especially when someone has an acquired brain injury. The person does change, their personality changes, their temperament changes, everything.”

“Something I’ve come to realise, over the last number of years, is that you really don’t appreciate what other people’s troubles are, until you see them or you’re walking in their shoes. You’re very much on your own. Your problems are very much your own. People can say, ‘We’ll do this and we’ll do that and whatever you like’, but, at the end of the day, very few people will actually follow through with promises and commitments to you. People can have the best intentions in the world, but they have their own lives and their own problems.”

“I have to take my hat off to Kay,” John says in praise of his wife’s efforts “to get up to the best that she can. I just hope things will stay good for her.”

He dismisses any compliment to his own devotion and care, adding “it’s no more than she would have done for me”.

Read: If we really love somebody, we can do anything for them