Life as a carer: ‘Crumlin hospital don’t ring you on Saturday morning for no good reason’ 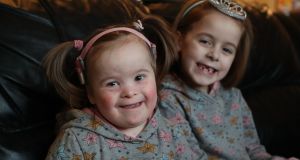 Ciara and Pat Reid are parents to Dearbhla, who is seven, and Rèiltín, who is four. Rèiltín has Down’s syndrome and is profoundly deaf. She was also diagnosed with cancer at just two years of age.

“We found out before I was 12 weeks pregnant that Rèiltín was going to have Down’s syndrome,” Ciara explains. The couple also discovered at later scans that their daughter would have a congenital heart defect, and a stomach and bowel issue that would require immediate surgery.

“We were lucky that all these things were picked up antenatally because we were totally prepared. We had savings – this was our rainy day. I knew I was going to take extended maternity leave.

“We’d arranged that once Rèiltín was born, my eldest daughter who was barely three at the time, was going to go and stay in Kerry with my sister.”

Rèiltín spent the first month of her life in Crumlin hospital. “I turned into a high-yielding dairy cow,” Ciara says. “I always knew I was going to be expressing because she was going to need to be tube fed.”

While Ciara and Pat juggled visits, Dearbhla went to a childminder. Further hospital stays ensued when Rèiltín went into heart failure less than a fortnight later and then had cochlear implant surgery at two.

But worse was yet to come for the family. Rèiltín was invited by a doctor in Crumlin hospital to take part in a study on children with Down’s syndrome and arthritis. “On a Saturday morning with 25 children due ahead of Dearbhla’s first proper birthday party, the landline rang,” Ciara says. “It was a doctor from Crumlin. I just knew. Crumlin don’t ring you on Saturday morning for no good reason. We went into Crumlin hospital to be told Rèiltín had leukaemia.”

With her youngest daughter seriously ill, Ciara left work. The financial costs mounted. “Living in the hospital is really expensive – car parking fees, coffees, takeaways,” Ciara explains. The couple also had to pay a childminder to take care of Dearbhla. “We were lucky that I’m one of these extremely cautious people when it comes to insurance, so we actually had an insurance policy that has paid our mortgage for two years.”

Ciara admits she’s worried how she’ll manage her mortgage this year as Rèiltín continues her treatment and their cover ends. “Our savings are gone.”

“Dearbhla suffered terribly with all of this,” Ciara adds. “She had an awful lot of sleepovers as she went from ‘Billy to Jack’. It took us a while to marry that all this was causing severe anxiety for her. There were some nights she didn’t know where she was going to be sleeping or when she was going to see Mammy and Daddy again.”

But Ciara’s responsibilities don’t just end here. She, along with her siblings, helps care for her elderly parents. Her father, who is 83, has bladder cancer and her mother, who is 82, has dementia and mobility issues.

It means a lot of juggling on the days her father has appointments as someone needs to stay with her mother. This can involve relocating to her parents’ house at 6.30am with the children in tow.

I’ll try to cook Mam and Dad dinner at least once per week,” Ciara says. “They love the company. They love seeing the kids coming to visit, but at the same time they can only tolerate the children for a certain period of time.”

In spite of all she does, Ciara struggles with “daughter guilt and sibling guilt”. Her own health has also been compromised. “It has taken me a long time to accept that my mental health was severely affected,” she says dismissing any praise of her strength. She insists there is no alternative.

“My daughter is still here. And we’ve met too many people who no longer have their children.”

Read:
1) When your child has a life-limiting condition
2) If something happens to me . . .
3) Mother had to fundraise to get palliative care
4) Caring for son and mother