Life as a carer: ‘It doesn’t feel natural that you become your mam’s mam’ 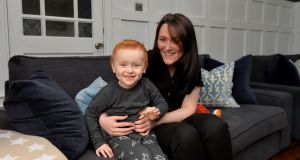 Martina Murphy with her two-year-old son Ethan in their home in Lusk. Martina cares for her mother since her father passed away. Photograph: Alan Betson

“I knew there had to be a name for it,” Martina Murphy says as we discuss her carer role as part of the “sandwich generation” – the name given to those caring for both young families and elderly parents.

“I left work to care for my dad when he got cancer, then had my little boy the week before he passed away.”

Martina now cares for her mother who had previously been cared for by her father. She’s also mum to two-year-old Ethan.

“My mum has bad osteoporosis so she’s a fall risk.” She also has “chronic kidney disease and a connective tissue disorder”, Martina explains. “She’s probably one of the strongest women I know and she never, ever complains.

“As much as I worry about her being a fall risk, I actually worry more about her loneliness. She was married to somebody for 40-odd years. She has the emptiest nest now of all of us.”

Martina commutes from her home in Lusk to her mother’s home in Tallaght, several times a week. Because the family rely on one car, Martina has to drop her husband Liam, who she says “works every hour God sends to keep the family afloat” to work, ahead of making the trek across the M50. It’s particularly challenging on the days Martina’s mother has early hospital appointments.

“Most of my day is taken up in the car worrying about my two-year-old who probably hasn’t had enough physical exercise in the day, and his needs haven’t been met because I’m trying to meet my mam’s needs. There can be days I have him in the car for blocks of two hours depending on the traffic.

“I have mam guilt. I have had that mam guilt since he was two weeks old. My dad had just died then. I was straight on the road with him, out to Tallaght because all that admin stuff had to be done for my dad. All the closing accounts, getting death certs, flying around with this little tiny baby who got flat head [syndrome] because I had him in the car so much.”

Attending her mother’s appointments are also a challenge with a toddler in tow. “I unfortunately have to keep putting him into situations where I expect him not to behave like a two-year-old. I expect him not to want to break out of his buggy and run riot up the corridors of Tallaght hospital. I get frustrated with him and I’m giving out to him. I’m throwing another bar in his face or another phone, expecting him not to behave how a two-year-old is supposed to behave.”

With so many demands on her time, it’s inevitable that Martina and Liam’s relationship feels the impact. “He moulds his day around what I have to do,” Martina says, admitting the couple get very little time together. They feel the financial impact of Martina’s role. “I’ve genuinely had to cut my cloth to suit my measure.”

Isolation is a huge factor for Martina. “You’re on the clock all day. There’s no real time to meet up with someone. If I do get a day where I meet one of the mams and she says ‘Come on let’s go for a coffee’, I feel guilty. Who am I to be sitting here having a coffee and my poor mother at home and I should be with her.

“Anxiety is a huge challenge for me,” Martina says, explaining how difficult she finds never being “off duty”. She attributes some of this to the shift in role when her father became ill and she became “the reassurer”.

“It’s not the natural order. It doesn’t feel natural that you become your mam’s mam or your dad’s mam. I think that’s a huge emotional toll on people.”

Read:
1) When your child has a life-limiting condition
2) If something happens to me . . .
3) Mother had to fundraise to get palliative care