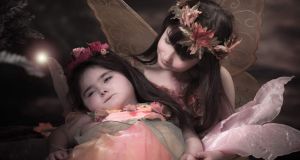 Daisy, who is six, and Ellie, who is 11: ‘A lot of siblings struggle because without anyone’s intention, they have to come second,’ says Lynn, their mother. ‘It kills me saying that because I love both my girls equally’

“The siblings are always forgotten,” says Lynn McDonald, referring to her daughter Ellie, who is 11, as we discuss Lynn’s role as carer for youngest daughter, Daisy, who is six.

Daisy has Rett syndrome, a genetic neurological condition that’s “like a combination of Parkinson’s, epilepsy, autism and cerebral palsy all rolled into one”, Lynn explains. “She has no voice and unfortunately no movement either.

“There’s also a question of mitochondrial disease. The combination of the two have given her chronic lung disease which means Daisy’s on a ventilator now 24/7.

“There are no words to describe the feeling,” Lynn says of discovering your child has a life-limiting condition. “There’s a dread that comes with it. It’s a dread that never leaves you.”

Lynn’s workload as a carer is relentless. On the several nights a week she is without a nurse, Lynn has to prepare 17 medications, drain bags, replenish fluids, wash, position, change extension tubes, check oxygen levels, catheterise Daisy and monitor overnight seizures. Daisy’s medications begin again at 6am when she also requires physiotherapy, bowel management involving enemas and washing.

“When a nurse comes in, it’s great,” Lynn says. “The nurse would be in from 8.30am/9am and she’d be gone at 2pm. It means I can clean the house. I can make lunch before Ellie gets in. I can put a wash on. I have someone to help me bathe Daisy – but it’s not a break. It’s not like I can leave the house. The “loco parentis HSE rule means a parent must supervise a paediatric palliative care nurse at all times even though I have no training whatsoever”.

This has led for to further challenges for Daisy’s sister, Ellie. “We’ve had to move schools because the HSE weren’t allowing me to leave the house any more so I could no longer get Ellie to school in Firhouse where she was very happy.

“A lot of siblings struggle, because without anyone’s intention they have to come second. It kills me saying that, because I love both my girls equally. Ellie is incredible with Daisy. She’d be as qualified as any of the nurses that come in here. There’s nothing that Ellie couldn’t do for her sister, and that’s wrong.

Carers in Ireland need to be recognised as employees of the State. We still don’t qualify for a pension

“Ellie has seen a counsellor for the last 4½ years. A lot of the kids will suffer with anxiety,” Lynn says.

“Ellie was bullied for a while in school and she wouldn’t open up and tell me. She didn’t want to put any extra stresses and worries on us as a family and tried to keep it to herself.”

Lynn’s own health has also suffered. Last year, Lynn ended up in the stroke unit in Tallaght Hospital. The previous year, she spent three weeks in hospital with pneumonia. “As a single parent, with a child with complex medical needs, my biggest stress and worry has always been, if something happens to me, what will happen to my girls,” Lynn says. She also worries about the future, without the means to buy a home.

“Carers in Ireland need to be recognised as employees of the State. We still don’t qualify for a pension. We could care for our loved one for 30 years and at the end of it not recognised as having done anything for anybody.”

“The public need to listen to us and they need to stand up for us. I was out there myself protesting against the water charges, but who stood up for us? We need our neighbours and our friends to say you’re not on your own any more.”